[Updated: Feb 10] When does the Lunar event end in Adopt me : Everything you need to know

Update (February 10) : Lunar New Year update will end on February 23. Adopt Me devs took the route of Twitter to confirm this. Have a look at the tweet down below.

Well, the Lunar New Year update has been added to Adopt Me recently. The update was released on 2nd Feb at 8 am PT which introduced several new pets and items in the game. However, some might be wondering when will this event end so that new content can be added. So, in this article, we will discuss the same. Here’s everything you need to know.

The Lunar New Year update brought home some interesting pets and items in the game. The most anticipated pet was the Guardian Lion which resembled the traditional Chinese Lion figure. It was well made and was categorized as a Legendary Pet. 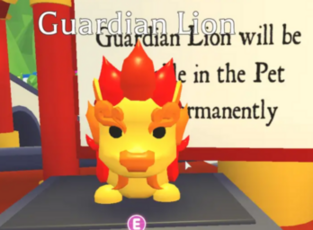 However, along with the Guardian Lion, 3 new pets were also introduced. They are- Ox, Lunar Ox, and Metal Ox. To know more about them, visit here.

It has been a week since the update hit Adopt Me, so now players are wondering when is it going to end? Well, let’s find out!

Adopt Me Lunar Update- When is it going to end?

As of now, there is no official news on this subject. But if we look back in 2020, the Lunar Year update was introduced on 24th Jan and stayed till 7 Feb. So, that totals up to 14 days i.e- 2 weeks. So we are expecting that this year’s Lunar Update will be staying for at least another week or maybe even more.

Did you know that new eggs are coming to Adopt Me? Yes, new Ocean eggs are going to be introduced in the game as a replacement for the fossil eggs. It is official that the fossil eggs will be leaving Adopt Me and the Ocean eggs will be taking their place. These ocean eggs will be featuring some new and interesting water pets and according to YouTuber @PREZLEY, the Ocean eggs might be added to Adopt Me right after the Lunar New Year Update. So, it may be just a week worth of wait for the ocean eggs to be released in Adopt Me. To know more, visit here.

Weather Underground Widget not updating : How to fix ?

Weather Underground Widget not updating : How to fix ?