The reveal of Killer Klowns from Outer Space surprised everyone at the Gamescom 2022 event with both new and older fans of the cult classic 1989 horror movie getting a video game adaptation. The trailer showed creepy clowns, third-person shooting, and in-game cinematics that looked gorgeous along with multiplayer that many are looking forward to. Seeing the positive reception, many are curious to try this game, including Nintendo Switch fans, and are wondering if it’ll be arriving on their platform. In this article, we’ll be talking more about the Killer Klowns from Outer Space game and if it’ll come to the Nintendo Switch. Continue reading the article to know more. 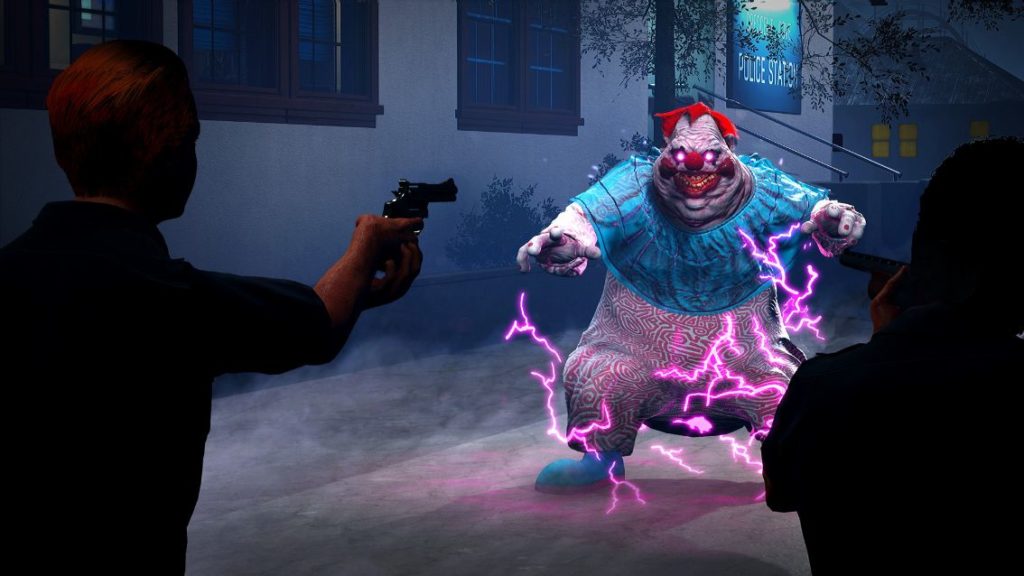 Made by the director of Friday the 13th: The Game, many fans are hopeful about this game and can’t wait to savor the horror multiplayer. It is one of the franchises that many didn’t expect to get a video game adaptation and we’re glad it did. If it executes the horror formula very well, it can go down as one of the most played games horror games for the next year, considering it is a cult classic. Not much gameplay has been revealed at the moment, however, the trailer showed brief footage of what the asymmetrical multiplayer horror game will look like in the final product and so far it looks immersive. The game is already listed on Steam and you can wishlist it and sign up for beta testing, which will commence very soon.

For those who are curious about the gameplay of Killer Klowns from Outer Space, the concept is very similar to Dead by Daylight and Evil Dead: The Game as ten players will be assigned to a 3v7 match with 3 players playing as menacing clowns, and the other 7 as civilians of Crescent Cove. Each party will have predetermined roles to play in the match, as a Klown, you’ll have to kidnap as many people as possible and take them to the spaceship, as for civilians, you have to get away from Crescent Cove as far as possible and escape, sabotage the spaceship and keeping the number of survivors as much as possible.

To add more variety, clowns will have different classes that warrant different playstyles such as Chubby the Tank, Rudy the Trapster, Jumbo the Scout, Spikey the Tracker, and Shorty the Fighter. The civilian classes are just how you’d expect from a classic horror movie such as Punk, Biker, Cop, Teen, and Redneck.

Is Killer Klowns from Outer Space coming to Nintendo Switch?

The portability of the Nintendo Switch does make things more convenient to play and Killer Klowns from Outer Space does look like a Switch game. Unfortunately, it won’t be coming to Switch as the complex level designs and optimization issues will prevent it from being playable. If on the off chance that it does get an announcement for Switch, we’ll update this article ASAP.

Is there a New Tales from the Borderlands Mobile (Android) & iOS (iPad, iPhone) Release Date