The “moving on” phase is definitely an interesting one. Generally, it is preferred to denote the arrival of something better. In that aspect, the technology space is almost always in a perpetual state of “moving on”. Every tomorrow brings on at least a slight improvement in yesterday’s technology. Take for instance the latest leap NVIDIA has taken from their Turing GPUs towards the Ampere ones. An absolute hit. This is not another NVIDIA article though. Their arch rivals AMD have been making progress of their own and though in shadow, Big Navi hasn’t been forgotten. Recently, there has been a great load of noise regarding AMD Radeon RX 6000. However, the brand has ensured this by no way means that lower end GPUs would be discontinued. The Radeon RX 5700 series is here to stay.

To those who assumed AMD were in their “move on” phase, suggestions of Radeon RX 5700 being discontinued made sense. The Navi Family would have taken over by the end of 2021. So logically AMD was just giving a heads up for transition, right? No, says AMD. This is not any transition period or “move on” phase or whatever other spell it is being called. Radeon RX 5700 series is their proud production and they will not discontinue it. Any hints of this happening in the near future are at least demolished by that. The America based company felt necessary to debunk floating rumors after Cowcotland signaled the possible extinction of Radeon RX 5700. 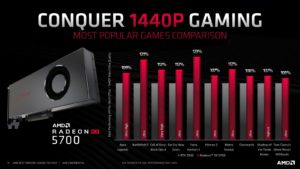 The Big Navi cards will be released by the end of October. AMD has an online event scheduled for the 8th October where they will possibly showcase the Zen3 architecture. The story was picked up by TechRadar and TechPowerUp. Therefore, after AMD officially called off the speculations we felt it was necessary to relay this information. AMD’s official message read as follows. “We are continuing to produce the Radeon RX 5700 series graphics cards, which deliver exceptional 1440p gaming experiences”. So sit back and relax.