Microsoft is so reputed that every gadget user would know the roots of the company. The brand took over Nokia and continued to run the Nokia Lumia mobile series. But unfortunately, Android and Apple sped across with better OS, interface, and device series supported by other brands. But Microsoft kept working on other smartphone supporting gadgets and applications. But finally, Microsoft announced the upcoming smartphone- Microsoft Surface Duo.

Also known as Microsoft Duo, the device will start the new smartphone series from Microsoft. The best news out of all is that Microsoft is switching to Android OS for the Microsoft Duo. So, we will get to see Microsoft device booting on Android OS.

Zac Bowden tweeted on behalf of Microsoft that the company didn’t have an immediate way to develop Android OS for Microsoft Duo as the work has already been in progress for long. Therefore, Microsoft had hired third-party vendors to quickly begin the development of OS for Duo. This third party company was none other than Movial.

Now that the device is ready, Microsoft is officially recruiting the Movial Team to work on the device and software post-launch. Just developing isn’t enough, as there is a lot to manage even after the release of devices. Hence, the company announced the recruitment on twitter which you can take a look at below. 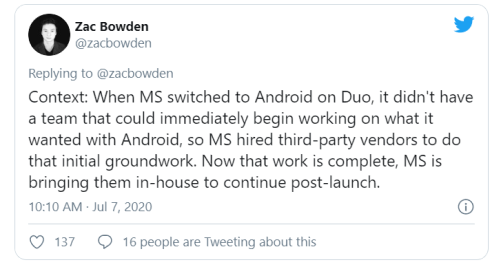 Movial confirmed the news by stating that the headquarters of Movial located in Finland will still function normally. But Movial’s last location will be taken over by Microsoft recruiting 60 employees, a team of Movial who will proceed to work on developing and managing Android OS for Microsoft. Read what Movial’s spokesperson has to say about the new changes:

This transaction involves people in Movial operations in Romania, Taiwan and the United States. Movial will continue operating as an independent company going forward, continuing to provide software engineering and design services. The transaction enables Movial to focus efforts on some key competency areas, such as cyber security. In the short term majority of our remaining staff will be located in Helsinki, Finland but we are also hiring in other locations.

The flagship device will be powered by Snapdragon 855 chipset. The base variant will pack 6 GB RAM and 64 GB storage. Other variants will come with 128 GB and 256 GB ROM. Users will also get to see an 11MP camera and a 5.6 inches AMOLED Display.

Rest assured we post related content and updates every day, so stay tuned! Also, share this article with all those who are waiting for this device!