Xiaomi is currently the trending topic for both the right and wrong reasons. Under the right reasons, we get to see that Redmi has some of the finest devices all set to launch in the first half of the year 2020. In this list, Redmi Note 9/ 9 Pro would be the first one to start this off with a bang. And talking about the wrong reasons, well, that’s exactly what this article is about!

Where a lot of devices are still waiting for the Android 10 update, Xiaomi Mi 10 got the luxury of enjoying the beta update at an earlier stage. But the update has worked its magic in the wrong way, as reports state that the users who updated their device are facing a hard time.

Xiaomi Mi 10 received a beta update at the start of the month of March 2020. But as soon as the version was out, Xiaomi stopped rolling out the update any further in a short while. 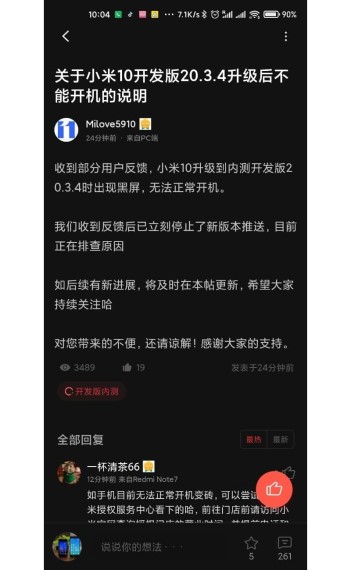 Xiaomi’s official statement about the issue-

The statement reported below is what the company has got to say regarding the issue.

“After receiving some user feedback that the Xiaomi Mi 10 has a black screen when upgrading to the internal test development version 20.3.4 and cannot boot normally, we stopped pushing the new version immediately. We are currently investigating the reasons. If there are new developments in the future, we will update this post in a timely manner. We hope everyone will continue to pay attention to the inconvenience caused to you. Please forgive me! thanks for your support”.

But what’s terrible is the issue that the users who have updated their device have been facing. The sad part is, till the time Xiaomi looks for a solution, the early buds who got their device to the latest version of itself can only live with regrets.

Rest assured, we will update the article when we receive any news about the Mi 10 issue, so stay tuned. Also, share this article with all those who are waiting for the update.