Riot Games’ new FPS title, Valorant, has been immensely popular since its official launch. The game offers a variety of cosmetic options for weapon customization.

Ever since the release of the Valorant, and the Ignition Battle Pass, the developers have been introducing the players to a number of exciting new weapon skins that could either be purchased from the game store or earned by leveling up the Battle Pass. And while these new bundles are quite expensive, Riot Games has been bringing them on a bi-weekly basis to expand the in-game shop. It almost seems like that there are some new weapon skins with every patch release.

The Elderframe skin set was added to the game on July 10 and it has caused a lot of reaction. But Riot is planning something bigger and greater. Let us take a look at the brand new leaked skin set below.

A recent leak has revealed that a brand new featured skin set is coming to the Valorant store. The new skin set design will be based around the Cyber Punk theme. This leak was initially shared on Twitter by Valorant Express through a number of game files. It has also revealed the weapons the skin set will be available on.

The leakers also revealed the release date of the new Cyber Punk skin set based on the release pattern of previous bundles. And you can expect the new skin set to available around July 24.

The Cyber Punk skin set is expected to include skins for the Judge, Odin, Frenzy, Bulldog, and Knife.

The weapon skins have not yet been revealed, but they will most likely be based on a retro futuristic design. Many of you might think that these new skins will be related to the upcoming Cyber Punk 2077 game. But it is still not clear if these skins will have any link to the upcoming game. You can take a look at the leaked information below. 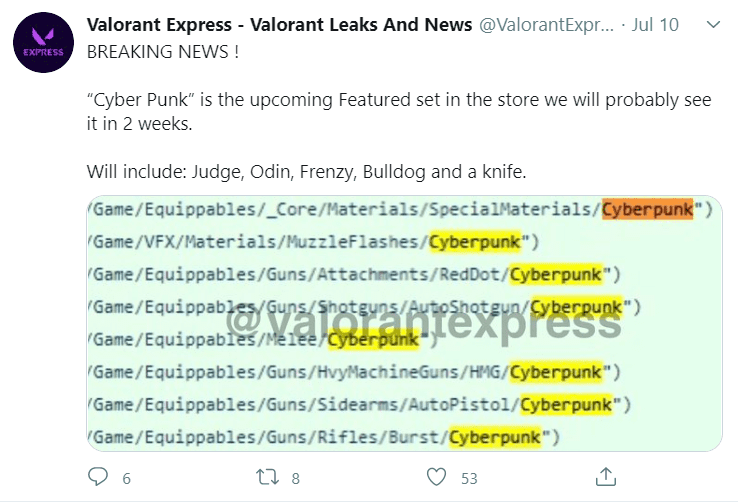