EA Sports UFC is a mixed martial arts (MMA) fighting videogame series developed by EA Canada and Skybox Labs. Published by EA Sports, the UFC games have three enteries in the series. The last UFC game, which was the third installment was released two years ago in 2018. Since then the franchise has remained under the covers. Untill recently, when news about a new UFC title started flowing on the internet. 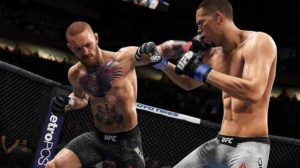 The leaked rumours about a new UFC game were going around for a long time but nothing seemed solid. EA Sports never announced or provided any intel about its plan. However, cut to yesterday, the publisher announced that they will be revealing UFC 4 later this week, on 11th July. The announcement was made via the official EA Sports UFC Twitter handle. 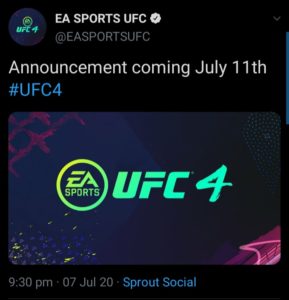 Furthermore, the day more yesterday, a listing for UFC 4 Beta was spotted on the Microsoft Store. The listing description reads,

In EA Sports UFC 4, the fighter you become is shaped by your fight style, your achievements, and your personality. No matter how or where you play, EA Sports UFC 4 puts ‘you’ at the centre of every fight.

If the description is accurate, then it suggests that players will be able to create and customise their own fighter in the final product. Further information about the game is still running pretty dry. But we expect to learn much more after the official reveal event. 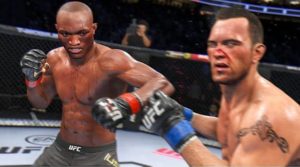 Last year in 2019, EA Sports had confirmed that they plan to review one of its dormant sports game franchise. Thus, it looks like UFC series is what they had in mind. According to news, UFC 4 will be released on the next generation of consoles as well as Xbox One and PlayStation 4. Be sure to tune in with us after the official reveal event to know more about UFC 4.