Forza Horizon is one of the best and most popular racing game series you might have ever played. Playground Studios has undoubtedly done an exceptional job so that the gamers can get real-time racing experience while playing Forza Horizon. The first Forza Horizon game was introduced in the world of gaming back in 2012 and the players were blown away with the realistic graphics and brilliant racing experience. This game series gives an open-world experience to the gamers and mainly focuses on the Horizon festival that has shifted the location throughout the game sequence. The gamers who enjoyed playing the previous versions of Forza Horizon are now eagerly waiting for season five.

After the release of the Forza Horizon in 2012, its subsequent titles were released in 2014, 2016, and 2018. This clearly shows that the series follows a release pattern. Based on this pattern, the Forza Horizon 5 was expected to release in September or October 2020 but it does not seem likely as there is still no official confirmation from Forza.

In 2019, Forza delayed the release of the seventh series of Forza Motorsport because the developers were focused on doing necessary changes in the previous season to improve its gameplay and fix all the issues. There is a possibility that same thing might be happening with Forza Horizon 5 because Horizon 4 is still getting DLC and expansion updates. This means that instead of September or October 2020, the fifth season of Forza Horizon might launch in September or October 2021.

Forza Horizon gameplay mainly focuses on the fictitious festival of Horizon. This festival is portrayed in a different location every season in the game. During the last four seasons of the game, the festival took place in major regions of Europe, Australia, and America. Many Forza fans on Twitter and Reddit, are predicting that the season five of Horizon will likely take place in Japan.

Forza Horizon fans have also come across many concept arts and maps. There have not been any official announcements, so nothing has been confirmed by the developers. Take a look at one of the speculated map concepts below. 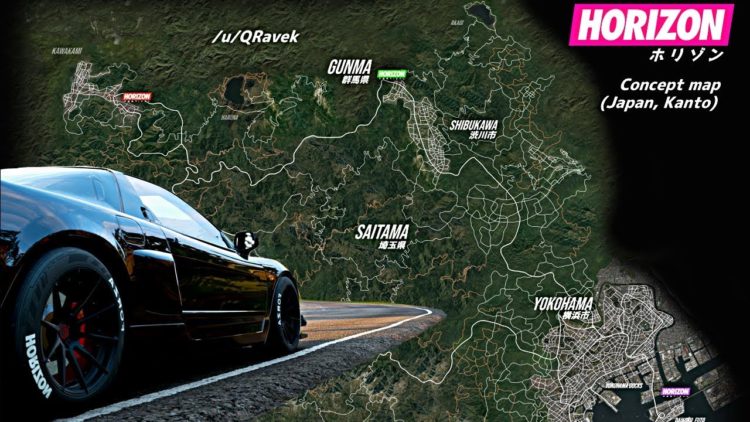