Many Surgeon Simulator 2 players have been getting troubled by the issue of long loading screen time, authentication error & black screen. Since it is a recently released game, these issues are very annoying for the players. If you are also facing any of these issues, then you must read this full article to know everything about these issues and their fix.

Developed and published by Bossa Studios Surgeon Simulator 2 is a recently released surgery simulation game. It is a sequel to the 2013 released, Surgeon Simulator. After the success of its predecessor, this game has come to create more chaos among friends by adding many new game modes including a multiplayer mode. Currently, this game is available to play on Microsoft Windows (via Steam), Xbox One, and Xbox Series X|S. Coming back to the topic, here is everything you need to know about the loading screen time, authentication error & black screen issues, and their fixes.

Talking about these issues, they are occurring due to server incompetency. Somehow, the Surgeon Simulator 2 servers were not ready for the number of active players that it had. The developers have clearly mentioned that the game servers were overwhelmed since the game’s launch due to high player demand. This situation brings mixed emotions for the game officials. On one side they are getting extra demand and on the other side, their servers are overwhelmed due to the same demand. Check the full statement in the snippet below: 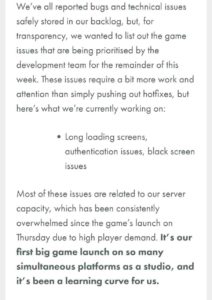 However, the developers have confirmed that they have made the issue of long loading screen time, authentication error & black screen, a priority. They will be launching the hotfixes for these and other small issues in the game soon. So, you can take a breath of relief and just wait calmly for the next update.

So, this was all about the Surgeon Simulator 2 long loading screen time, authentication error & black screen issues. If you found this article helpful, share it with your friends.