Snapdragon 750G is here, with support for the 5G network. But the network type is the least to bother about as this chipset is much more than just a mid-range processor in the Snapdragon 700 series. A tweet came from Digital Chat Station, unveiling the Snapdragon 750G 5G chipset officially.

The post also contained two images, the official post itself and the stunning teaser of the chipset.

The best feature about this chipset is not the network support as mentioned already. The 750G chipset will support 120fps. So gamers, you know what to buy now! 120fps for gaming in a mid-range chipset is what every smartphone buyer is looking for.

Snapdragon 750G is being referred to as the alternative for the S690 chipset, but only much faster. And the cost? Confirmed to be lesser than the S765 chipset. Snapdragon 750G will deliver up to 4.0 TOPS, which is 20% more than the S730, its predecessor. S750G can hit download speeds of 3.7 Gbps because of equipping X52 modem which adds mmWave 5G (The S60 chipset comes with the X51 4G modem, one level lower). 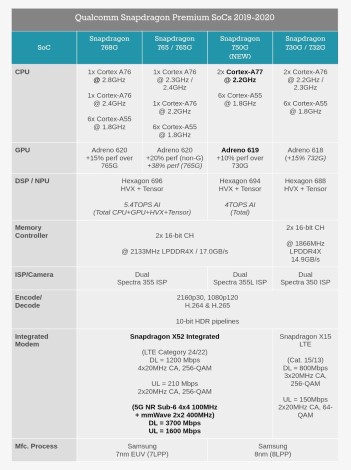 Overall, it is a 20% performance boost compared to the S690 chipset and much better hardware support. Qualcomm assures PC-level seamless gaming performance with the S750G chipset. AI noise suppression is another thing to note; might just convince every gamer to blindly buy a device powered by S750G!