Samsung– A pioneer brand that has stuck around since 1938. The brand has been very successful in maintaining consistency for decades together. The best part is, Samsung has multiple businesses other than just smartphones. Samsung refrigerators show some of the coolest patterns and color schemes. Samsung televisions have been reviewed to be the perfect value-for-money televisions out there. Overall, the brand is multi-facilitated people serving company.

Samsung Galaxy Note 20+ is the upcoming launch planned by the brand. The device has been spotted on Geekbench and has revealed some important details about the device, which you will find out below.

As mentioned before, the device has been spotted on Geekbench, revealing some of the coolest features that we can see the Note 20+ rocking! The model number of this device in the Geekbench listing is SM-N986U. If you recall, the model number of Samsung Galaxy Note 10+ was SM-N976U (US model). Also, Max Weinbach has tweeted that software development has begun for this device along with a couple of other gadgets, which you can see in the image below. 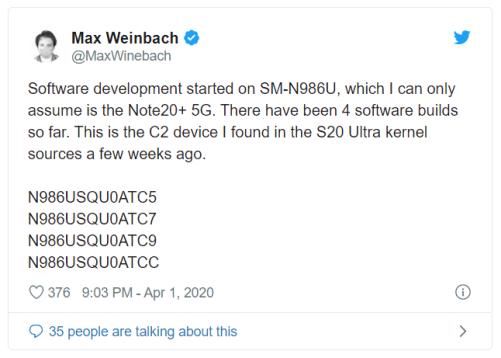 The details in Geekbench has revealed that Samsung Galaxy Note 20+ will be powered by an octa-core processor and boot on the latest Android 10 OS. Also, the 5G supporting device will come with an 8GB RAM in one of its variants. The single-core score of the device is 985, and a multi-core score is 3,220. The listing has considered a prototype that shows potential changes possible in the score in the future but can be considered the closest.

There are no details available about the chipset, but the motherboard seems to hold “Kona”, which is probably the codename of Snapdragon 865 chipset. The only confusion is that the processor is clocked at 3.09GHz, higher than that of a normal 865 chipset. We will most probably get to see Snapdragon 865+ chipset in Samsung Galaxy Note 20+ 5G. 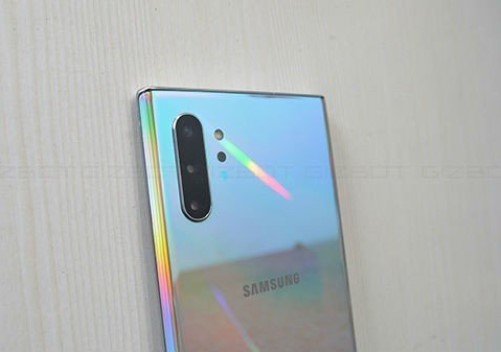 With the very few details revealed, we can already state that the Galaxy Note 20+ will be a game-changer, especially with the advanced processor. All that people can do now is wait for other details to be revealed as the device is still in the building stage. The expectations are to bring unique features which we are already getting to see.

You know already that this device is a super-premium smartphone from the brand. This flagship device might be priced with a whopping tag of Rs. 99,000. The expectation too can be placed as high as the cost and this device might end up being one of the best smartphones of the year 2020.

The device is yet to be officially announced. Rumors have been hitting the web that June 10, 2020, can be marked as the expected date for the launch of the Samsung Galaxy Note 20+.

Note: We will update this article if we receive any update regarding Samsung Galaxy Note 20+, so stay tuned. Also, share this article with all those who are waiting for this smartphone!