Samsung– A pioneer brand in the tech world that has been the most consistent and creative. Samsung is a direct rival to some of the top-end brands like Apple and OnePlus. The brand was founded in 1938 and has been very popular in countries like the U.S. and India. Though the pandemic has taken down a lot of device launches, Samsung has kept its lineup ready to begin after the chaos settles a bit.

Samsung Galaxy A21s is a mid-range smartphone from the brand that is rumored to launch very soon. Also, this device was recently spotted in Geekbench, which revealed many details about the same. This article will bring you the Geekbench score, details, release date and all you need to know about Samsung Galaxy A21s.

A new Samsung device has appeared on Geekbench listing, which is known to be the Galaxy A21s. The device has secured a single-core score of 183 and a multi-core score of 1074. The list was uploaded on the 1st of April 2020 with multiple details mentioned about the device. Samsung Galaxy A21s will boot on the latest Android 10 OS. Check the official image below. 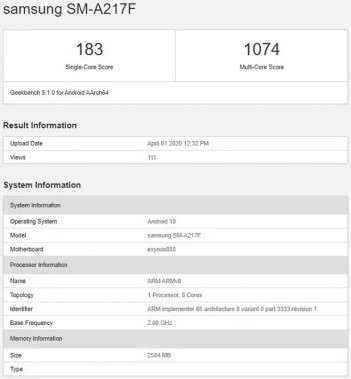 The model number of the device in the listing is given as SM-A217F. Samsung Galaxy A21s will be powered by an octa-core processor with Exynos 850 chipset. The frequency of the GPU is clocked at 2.00 GHz One of the variants of this device will come with a 3GB RAM. The report also suggests that the base variant will either rock a 32GB or 64GB expandable internal storage.

Other reports have suggested that Samsung Galaxy A21s will be run by a massive 5000mAh battery. The color variants available would be Black, Blue, Red, and White. This device will rock a single camera in the front and a dual-camera setup at the rear end. But individual camera details haven’t been revealed yet.

Once the lockdown ends everything will start functioning normally, we all know that dozens of devices and gadgets will be launched together as all the planned events in the last two months and in the coming month to are canceled. The Galaxy A21s is an amid-range device with very minimal specs. The audience is expecting a power-packed device that will be able to stand out among the loads that will be launched. All that we can hope is for the device to make its way in the existing competition. 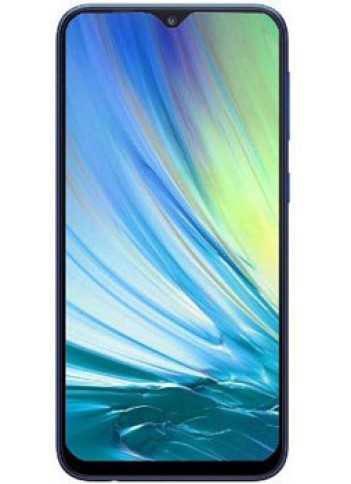 The exact price hasn’t been revealed anywhere online. But coming to a conclusion after studying various reports, we can expect the base variant of the Galaxy A21s to cost around Rs. 11,999.

There are no official details about the launch date of these devices. But we can expect the Galaxy A21s to be officially announced after April 15, 2020. Some sites also state the unofficial yet expected release date of this device is on April 23, 2020.

Rest assured, we will update the article if we receive further information about the Samsung Galaxy A21s, so stay tuned. Also, share this article with all those who are waiting for this device.

Resident Evil 3 Remake: Jill will Join the Resistance on this date

Resident Evil 3 Remake: Jill will Join the Resistance on this date