Rust: How to get Arctic Suit

The Arctic Update of Rust brought forth a lot of new additions to the game like a new arctic biome, research base, polar bears, AI update, and QoL improvements. Speaking of new features, Arctic Suit is one of the exclusive items that stand out from the rest and it has its own features that certainly make it worth getting. It is a reskinned version of the Hazmat Suit that has a simple design and instead of protecting you from radiation, it protects you from cold. If you’re planning on getting this suit and are looking for a guide that shows every step on how to get it, this is the one right here. Continue reading the article to know how to get Arctic Suit in Rust. 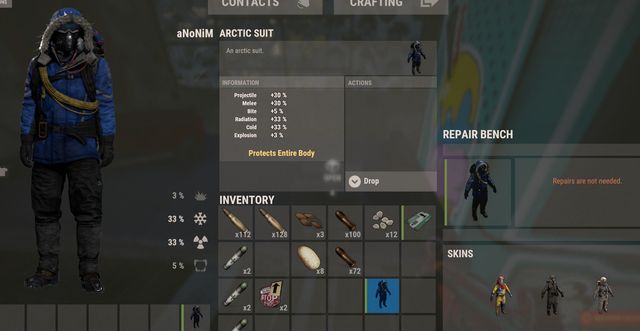 Similar to its other counterpart, Arctic Suit is the first cosmetic item that comes with its own unique stats with 40% cold protection, which is significantly better than its other variants, however, compared to the Hazmat suit, it falls behind in some areas like 10% less protection against Radiation and 2% reduction in damage when hit with explosives. and bite. Well, it also has a waterproof feature similar to a Wetsuit along with cold protection. A fairly well-balanced item that can nonetheless give you an advantage in certain areas with its impressive stats. Now that you’re wondering how you can get your hands on the Arctic Suit, we’ve mentioned that below so check it out. Aesthetic-wise, it looks sleek and will certainly make you stand out in the winter biome.

How to get the Arctic Suit in the game?

Sadly Arctic Suit in Rust is a pay-to-win item and can only be obtained by spending real-life money on the marketplace of the game. If you want to get your hands on Arctic Suit, it can be bought directly from the in-game store of Rust for 12.99$ and can’t be acquired anymore on the Steam marketplace, which is a shame as most of the player base of Rust has bought the game directly from Steam and not having the ability to buy Arctic Suit is disappointing. This might sound disappointing to some fans as they cannot get the Arctic Suit by grinding the game, but some are perfectly okay with paying it as through it they can support devs.

We hope that you enjoyed reading this article, stay tuned for more updates about Rust, news, guides, and more at Digistatement.