Though mostly about the ROG Phone series, the ASUS community forum has been extremely active and interactive. The latest ROG phone was the mind-boggling ROG Phone 3- perfect design and out-of-the-world features. But how satisfied have users been with the software updates?

The most known issue with the ROG Phone 3 is the black crush issue we already posted about. The latest OS update is update version 17.0823.2008.78 and users have already reported on the official forum that the black crush issue isn’t sorted yet. But here comes another problem- battery draining. After the .78 update, ROG Phone 3 users are facing battery draining issues.

A lot of users have posted on the ASUS community forum that after updating to .78 version, battery drain is happening to an extent where 3-4 hours has been the duration within which their ROG Phone 3 has dropped dead from 80%. Here are some of the posts from the forum- 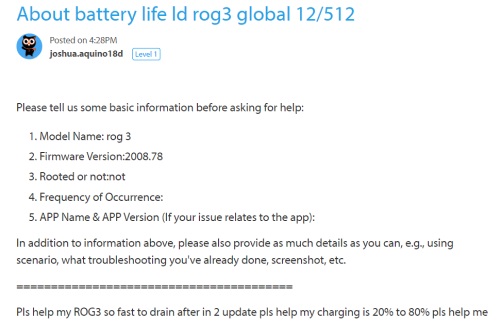 As you see in the first post, it is after the .78 update (latest), users are facing terrible battery issues in their ROG Phone 3. However, the issue doesn’t end here.

Replies to these comments were a lot more unlikely. Apparently, even ROG Phone 2 users are facing similar battery drain issues after the last update. Here are some of the replies to the posts about battery drain-

The ROG Phone series is revolutionary. It marks the importance of gaming and how much interest today’s people are taking when it comes to the professional gaming aspect. We hope these software issues like black crush and battery draining are sorted soon with the upcoming updates.

We post related content and exciting updates every day, so stay tuned! Also, share this article with all those who are facing this issue so that they can voice out too using the ASUS forum.

RTX 3080 graphic cards to be re-stocked in a week: Here’s the timeline

RTX 3080 graphic cards to be re-stocked in a week: Here's the timeline