Huawei is climbing back the global charts by teasing some interesting line-up that awaits release. Not that Huawei was doing any poor when it came to the local market (China). But on a global level, Huawei without Android is not the first choice. But with HarmonyOS in plans, Huawei could potentially make a massive comeback into the game and pose a strong rivalry to the Android makers.

Not long ago, we posted an article with the teaser wallpaper for the Huawei Mate 40 series. We are back with an amazing piece of news for those who are looking forward to the release of the Mate 40 devices.

Huawei Mate 40 Pro will officially be available in three variants. The base variant will be the one with 8GB RAM and 256GB ROM. The mid variant, as you can see in the image below, will pack 8GB RAM and 512GB ROM. The high-end variant will come with a huge 12GB RAM but with storage reduced to 256GB ROM.

The Mate 40 series will also bring a luxury model known as the Huawei Mate 40 Porsche Edition. This device will be available in two variants. The base variant will come with 12GB RAM and 256GB ROM. The high-end variant will pack 12GB RAM and a massive 512GB ROM. 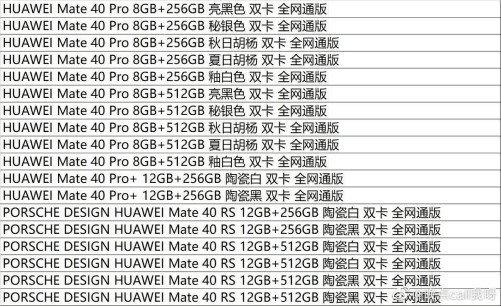 The Mate 40 series hasn’t been officially announced yet. So the price and release date of the Mate 40 series devices isn’t out yet. But you can expect the announcement by the end of this month.