A new update is coming to Pokémon Go which is set to add cosmetic items in the form of stickers. Niantic announced the update today on Twitter and the Pokémon Go official website. Apart from that, the developers have also given additional information regarding co-op raids. 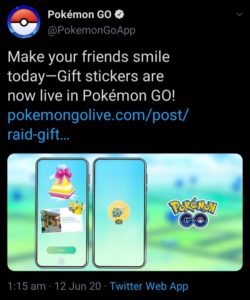 The update provides the players the ability to send and receive stickers. There stickers can be exchanged alongside gifts to show your friends some appreciation. Right before sending a gift, players will get the option to ADD STICKER. They can then select the sticker they desire to send and attach it to their gift.

Niantic is giving out a set of stickers for free. However they can only be used once so be sure to stock up on them by opening gifts received from your friends. At launch, Niantic has promised five types of stickers.

The tweet does not showcase any of the stickers, nor does the website give any insight on what they look like. However, we have managed to get our hands on some leaks which showcase the stickers coming to Pokémon Go. These leaks have been made by Pokémon Go data miners and they promise a set of 15 stickers at max, making their way to the game. Take a look at some of them down below. 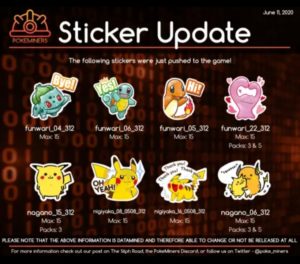 These stickers are purely cosmetic changes coming to the game which provides a new way to communicate with your friends. They will not affect the gameplay in any sort of way.

Alongside gift personalisation, the new update will also being co-op features to the raid later this month. Players will now be able to invite up to 5 friends in a party. By clicking the “+” button, friends can be invited in both public and private lobbies that you’ve joined in person. Your friends will receive the notification via the Nearby Screen or if they have enabled push notification.