Seasonic is among the leading PSU manufacturers and according to them, NVIDIA GeForce RTX 30 series might have this massive power connector.

Okay. I have made my mind and you should as well. NVIDIA is going to push us to the edge until they finally have their #ultimatecountdown run-out. In the past few days, we have been getting glimpses of various products from their RTX 30 series. The story has been unfolding leak by leak, day after day, but NVIDIA will only make things official after or during the launch. The only thing is now we are not just exploring figments of hyped imagination. A lot of speculated material is coming out in the flesh. First, the PG 133 boards, then a possible shot of what’s being called the GeForce RTX 3090 and now we have a power connector.

Taiwan based power supply and computer PSU manufacturer Seasonic uploaded the picture of a certain power connector. No surprises for you here, the branding on the pack says, NVIDIA. Seasonic posted the picture in quite a manner, making quite a remark. They mention that there is no NDA between them and NVIDIA. This trademark property is a 12-pin graphics card power connector. It doesn’t take a genius to add two and two here and make out that this will complement the new Ampere-based GPU line. The GeForce RTX 30 series will initially be a family of four GPUs. The high-end flagship in this series will be a behemoth running on 24 GB VRAM as per popular outlets. 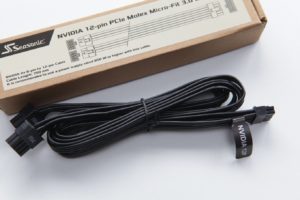 Seasonic has done things unconventionally this time, given their typical trends. The adapter has facilitated the conversion of a pair 12V 8-pin PSU side connectors into one 12 pin connector. This is in complete contrast to their usual way of converting one PSU-side 8-pin 12 V connector into two 6+2 pin PCIe power connectors along a single cable. But again, the GeForce RTX 30 series has new vibes to it, so why not Seasonic too. It is indeed interesting and bewildering at the same time, this presence of a 12-pin power connector. I mean the amount of power it is expected to demand is 700W or close. It makes me ridiculously curious to think if the Ampere GPU behemoth will be built on an induction heater platform.