NVIDIA's online event on September 1 will mark the release of GeForce RTX 30 series, Ampere based GPUs.

Can NVIDIA stop being such sadists? The online event is scheduled for September 1 which is just 10 days away now. NVIDIA could have chosen to be sweet and release all the information in one go. But, hey where’s the fun in that? They release updates slowly and almost unexpectedly, that instead of clarifying our pre-conceptions only leave us entangled in more. Anyways, everything will be made crystal clear after the GeForce RTX 3000 series is launched online because that is one thing we trust NVIDIA with. This post is specific to the RTX 3090 who many doubted would be released initially. Well, the final nail in the coffin is yet to be applied, but sources suggest that it won’t take too long.

Possible specs of the GeForce RTX 3090 and pricing

A few photos got leaked of what appears to be the NVIDIA Founders Edition of the upcoming GeForce RTX 3090. The graphics card will be built on NVIDIA’s PG 133 board platform. A certain “PG 133A” board also got certified by the RAA, a day or two ago. The RTX 3090 will be the equivalent of RTX 20 series variant FE RTX 2080. If the leaked shots are anything to go by, NVIDIA has upped their game by margins almost unfathomable this time. We saw the RTX 3090 side by side to the RTX 2080 and, man the latter is put to shame like anything. A week ago, Micron had made a crucial revelation regarding NVIDIA’s upcoming Ampere based GPU line. They confirmed that the GDDR6 memory will come as standard on the higher-end variants in RTX 3000 series. 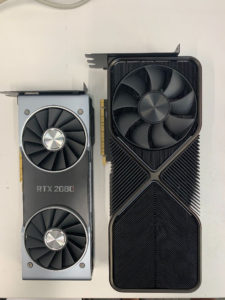 The triple slotter along with the aluminium heatsink and unique obverse dual-fan will be the main centre of attraction with the RTX 3090. NVIDIA’s reputation in the graphics space is such that stakes have never been too high for them. In fact, the third-party manufacturers of graphics card are often in pressure to match up to them. But, setting benchmarks for themselves is what NVIDIA heavily believes in and the RTX 30 line is about to do just that. A few sources claim that NVIDIA will price the RTX 3090 rather aggressively than lavishly. An estimated price of under $1500 has been mentioned on various platforms. In that case, we are compelled to think of a luxurious RTX 3090 Ti, which will offer us the mammoth 24GB VRAM and certainly not go easy on our wallets. Well, that’s just speculations, for all your answers, join NVIDIA on September 1, 2020.

ASUS ZenFone 7 hands-on pictures leaked from all angles: Here's how it looks!