Xiaomi has done it once again as it continues to be one of the best-selling brands in the world. Currently, Xiaomi stands as the third-largest smartphone brand in the world. One of the best launches this year from Xiaomi is the Mi 10T series. The brand is flexing the amazing snaps captured on the Mi 10T series devices via Twitter and all of them look sharp and very creative. Looks like Xiaomi would stay at the top for much longer!

We’ve been posting about every single detail revealed or leaked regarding the upcoming Xiaomi’s custom operating system update- MIUI 13. It’s hilarious how a couple of months ago, all of us were excited about the MIUI 12 update but here we are, the release date of MIUI 13!

To a thread about MIUI updates on the Xiaomi community page, the super moderator has replied that MIUI 13 will be released to users in the Q2 phase of 2021. Here’s the image of the post from the official end- 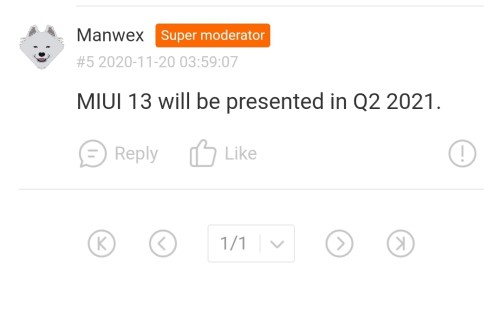 To be specific, we can expect the official launch event after March 2021. Note that the MIUI 13 will be based on the Android 12 OS, which is yet to be unveiled too. Details about MIUI 13 features are already being revealed gradually. So Xiaomi seems set with all the software related plans for the next 1 year at least.

Two features of MIUI 13 have already been revealed- New reboot options menu and new volume options. You can check out the leaked images and details of these features in the link below!

We will update this article when we receive further information about the exact date of release or launch event of MIUI 13.