Microsoft Flight Simulator has been witnessing glitches recently and has gotten some stick from users around the world.

Simulation games have enjoyed the popularity of their own in the gaming category. Sometimes laid back but mostly immersive they cater to an audience that believes in realism at best. There is no one way to win a simulation game. It is an open-ended exploration of the environment the player is placed in. The inception dates back to the 1980s when the Fortune Builder and SimCity exploded to fame. Now we have some of the classiest simulator games available in Railway Empire, Kerbal Space Program, Asetto Corsa and not to forget the Sims 4. Today’s post concerns itself with the popular Microsoft Flight Simulator. Which well, hasn’t been so popular in the past few days.

It really is a pet peeve for gamers when they start experiencing bugs and glitches from these games. In firing line then are the developers. Microsoft’s Flight Simulator stands out among its competition in terms of how realistic it gets at times. Well, it has stood out once again, not for all the good reasons this time. Those of you unfamiliar with the game, Bing Maps are responsible for the possible navigation within the game and they have got things absolutely wrong. Among the most reported issue on Twitter recently was the appearance of a big skyscraper in Melbourne that in real life doesn’t exist at all. To some, this was a delight, others in the majority, believed the bug must be removed soon. Problems with how places have been mapped do occur at times. The major issues encountered were related to malfunctioning of the game itself. 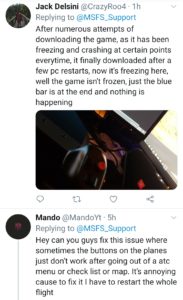 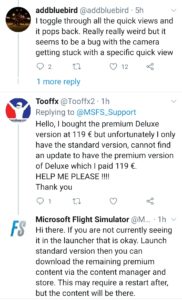 Some gamers cannot proceed after a certain data download screen appears. Others had problems installing the game, as it took multiple restarts to complete the process. If you have been stuck here too, it calls for some persistence, my friend. A few users were also worried about their premium deluxe version not being accessible even after proper installation. Microsoft did respond to these emerging issues via a tweet from their official Flight Simulator account. They mentioned that the new update build 20197 has resolved a few problems, including the failed launch of the Simulation program. But that is for the Windows Insiders. If the error on your screen says, “The filename, directory name, or volume label syntax is incorrect.” then you better download the new build to enjoy Microsoft Flight Simulator. Nonetheless, the problem at present seem aplenty and solutions from Microsoft, scanty.