Official specs and details inside

Mi Air 2 was announced in April 2019. It was the first high-end TWS earbuds from Xiaomi. The Chinese tech giant was already in the game when it came to TWS, but the Air 2 was indeed something users looked out for. But since then, fans have done nothing but just wait for the next set of classic earbuds from Xiaomi.

Finally, the Pro version is here. The official details of the Xiaomi Mi Air 2 Pro have been leaked and here we are, with all that you need to know! 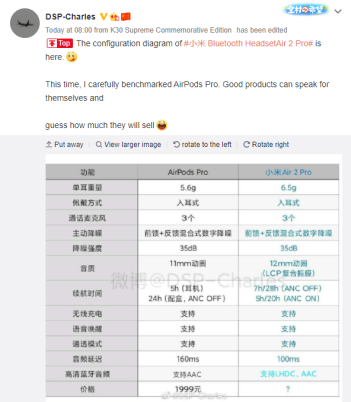 Continuing the in-ear design, the earbuds will come with three microphones on each side. The weight of the Mi Air 2 Pro earbuds is confirmed to be 6.5 grams.

It has also been confirmed that the Mi Air 2 Pro will feature Active Noise Cancellation (ANC). Though the Air 2 Pro is the top-end variant from Xiaomi, overall, the expected price is way lesser than most premium TWS earbuds in the market. So the ANC feature indeed will get the Air 2 Pro a huge edge after release.

Other unconfirmed details about the Mi Air 2 Pro includes wireless charging, open to wake-up, auto-connect, and much more. With an audio delay expected to be as low as 100ms, the rumored battery life of the Mi Air 2 Pro (with ANC on) is over 5 hours.

We post related content and exciting updates every day, so stay tuned! Also, share this article with all those who are waiting for Mi Air 2 Pro!