HarmonyOS was launched in August 2019. The OS is already available for smart TVs. So what the Huawei and Honor smartphone users are waiting for is actually the HarmonyOS 2.0, which was officially announced at the Huawei Developer Conference 2020. This version will not just roll-out for smartphones, but even for Huawei tablets and wearables.

Huawei has published a list of devices that will most likely be supporting the HarmonyOS update. But as not even the testing has begun, the confirmed list is yet to be unveiled.

HarmonyOS is not just a custom UI but is expected to be competing with the mainstream Android OS and iOS, more like an alternative. Here are the details about the release date and the list of eligible devices expected to be receiving the stable version of HarmonyOS 2.0!

We recently posted that the HarmonyOS beta update will roll-out on the 16th of December 2020, for the Huawei Mate 40 series. This has been officially confirmed and only select users will get access to this public beta build. It was later confirmed officially that the beta update will roll-out only for Chinese users on December 18, 2020, as you can see in the image below shared via Weibo- 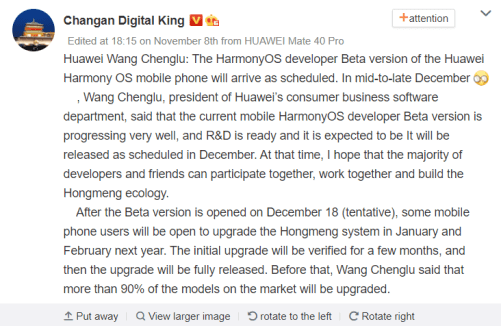 Talking about the stable update, HarmonyOS 2.0 will be rolled out for all the eligible devices by the Q2 phase of 2021. In fact, the first Huawei smartphone with HarmonyOS out-of-the-box by Q2 2021. We will update the article when an exact date is announced by the officials.