Well, for players who play Loomian Legacy, a new Weather Update has been released just 12 hours ago before writing this. So now you might be wondering what changes have been made and which new loomians are added in the game and how to catch them. Well, in this article, we will show you how to catch the ancient plant-type Loomian, Ceratot. Here’s everything you need to know.

The game was first released in 2015 and has been quite popular since then. With over 600M+ total visits(according to the Official Loomian Legacy page), the game is among the most played ones in Roblox. Recently, a weather update has been introduced in the game which brought some weather focused changes along with the addition of new Loomians in the game. Among the Loomians, one is Ceratot. It is an ancient plant-type Loomian that is not available to catch readily. So, you might think about how to catch it then? Well, we have the perfect guide for you.

There are a total of 6 new Loomians added to the game with this new weather update. If you wish to know more about them, head here.

Ceratot is among the 6 new Loomians that are recently added to the game. It is a fossil Loomian that comes from fossil hunting. 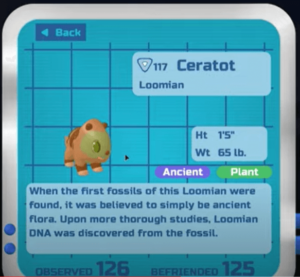 It has got three different fossils named Thorn Fossils-Petrolith Thorn A/B/C. So, to obtain the fossils, you have to use the UMV to go underwater and hunt for fossils.

Once you’ve gathered all three, you will be able to get Ceratot by putting them together in the fossil machine located in the building where the UMV is stationed. But acquiring these 3 fossils is a very difficult task as they are very rare. So, consider putting your time and effort diving underwater to gather these three items.

This concludes our guide on how to catch a Ceratot.

However, if you want to catch a Hydrini(a new Loomian added in the weather update) we have prepared a separate guide for you to help you catch one. Visit here.

Fix CrewLink not working issue in 2021