The concept of Alexa and Siri has evolved into a much bigger implementation today. You can sit in a corner of the room and control the tiniest of things to mind-blowing operations like turning on televisions and controlling the lighting just by speaking things aloud. When it comes to Google, the developers are not anywhere behind regarding these features. Google Home Mini is the popular wireless speaker users go to if they want to purchase a portable smart speaker.

However, Google Home Mini users have been facing an extremely frustrating glitch for which no solution has been provided to date. Every first time you attempt to use Google Home Mini, the response is “something went wrong” or “please try again in few seconds”.

It has been reported that the second time does work fine, as stated by the user. But the first time, it seems like the Google Home Mini takes a second or two to recover from sleep mode, which is hopefully just a mocking statement among users!

Most of these glitches can be sorted out in a very common way- device restart or factory reset. Unfortunately, one of the users tried it and the issue persists. Here is a thread from the official Google community page which has received 536 upvotes with 317 replies as of today. 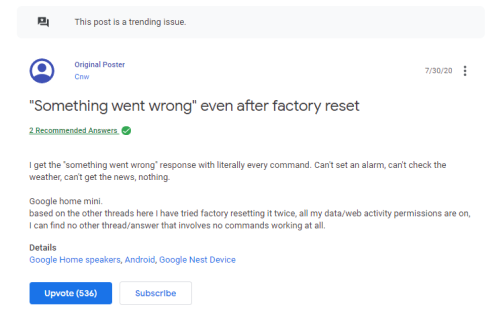 To this thread came a reply from a moderator/ community specialist who stated that the issue has already been resolved yet a lot of users are still facing troubles.

But it is good to know that the issue has been taken into serious considerations and developers are working to resolve it. But the only solution you have right now is to send official feedback using the keywords “GHT3 Something went wrong”. Rest assured, we’ll keep you posted regarding this glitch!