Far Cry 6 has been leaked ahead of the Ubisoft Forward event on Sunday. The leak was due to a Hong Kong PlayStation Store listing, which revealed many details. Most importantly, the game is coming to both PlayStation 5 and PlayStation 4 on 18th February 2021. If you purchase the PS4 version of the game and later upgrade to PS5, you will get the next-generation version for free.

The latest leak also confirms the rumor that the Breaking Bad actor, Giancarlo Esposito will feature in this game. According to the description in the listing, the game is staged on the Island of Yara. This new playground is supposed to be the largest Far Cry playground to date. It is described as a tropical paradise frozen in time.

Giancarlo Esposito’s character is called Anton Castillo and he serves as the dictator of the island of Yara. He has a son, Diego who is following his bloody footsteps. Castillo and Diego’s aim is to restore Yara back to its former glory, by any means.

The protagonist in the game is a resident of Yara called Dani Rojas. He is a guerilla soldier fighting to liberate the nation. The game also has a two player multiplayer mode. The pre-order bonuses for Far Cry 6 include, a state of the art Discos Locos weapon and a skin for “Chorizo”.

You will employ makeshift weapons, vehicles, and Amigos, the new Fangs for Hire to burn the tyrannical regime to the ground. Players will fight against Anton Castillo’s troops across jungles, beaches, and Esperanza, the capital of Yara.

The game looks promising and the fans are excited about getting their hands on Far Cry 6. More information will be released on Sunday during the Ubisoft Forward event, where the game was likely to be revealed. You can find the leaked information below: 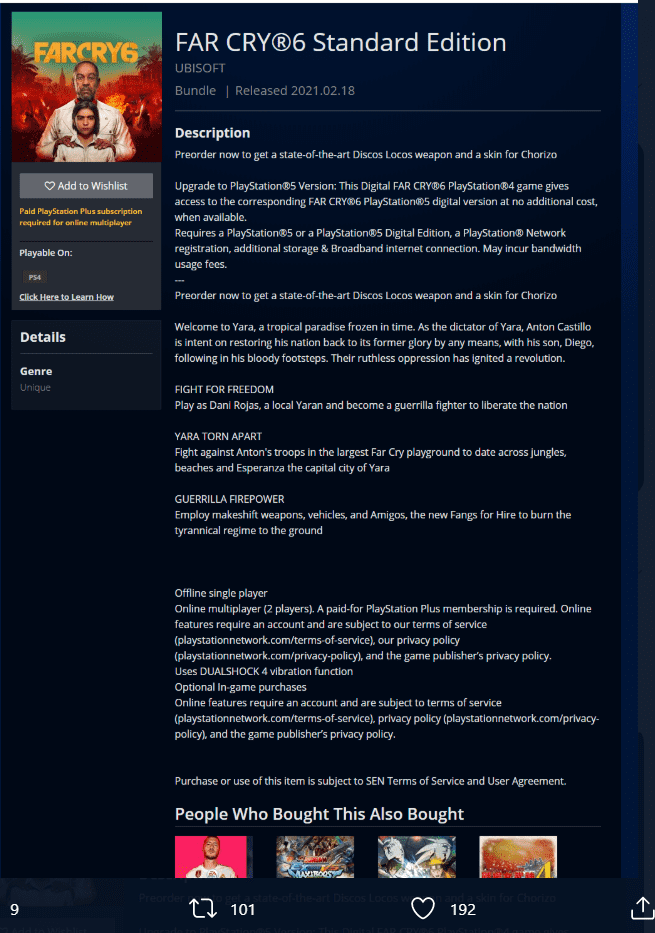 How to unlock Overkill Perk in Call of Duty Mobile