“Forget what you can’t do yet. Focus on what you can do now.” These lines of Kuroki Gensai have changed the combatant way of Rihito. He went beyond his thinking and believed in himself. But is this belief enough to defeat the Falcon? In this article, we are going to discuss the outcome of the second round, spoilers, and the release date.

In the previous chapter of Kengan Omega titled “Spin”, Kuroki Gensai has justified the pre-initiative technique of Rihito. The pre-initiative technique is to check the opponent’s strongest move and stop them from using it. The previous chapter has also covered a glimpse of the training where Kuroki taught Rihito about this technique. Rihito has been struggling against Lee from the very beginning of the second round. He only tried to escape and figure out Falcon’s ninja moves which are next to impossible for him. 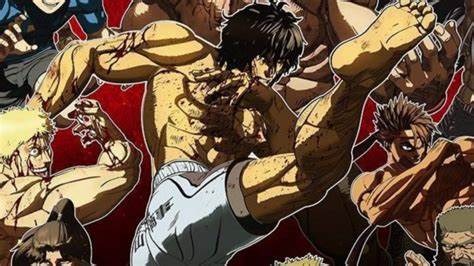 On the other hand, Falcon was able to keep landing all his fairly shallow moves on Rihito and pile on the damage. In the end, Rihito reminded his training and the words of his master, Kuroki. Hence, he forfeited on dodging to take the attack head-on and used that chance to attack Razor Edge.

Since Razor Edge is such a high damage move, Rihito will win for sure if Falcon keeps trading blows like that. Now, Falcon can’t rely on his misdirection because he knows that one more Razor edge could end this match. So, we suspect that Falcon will go back to his “King of Destruction” style that he used when fought in China. This will lead to a turn in the battle. Falcon will break out his old MMA moves and simultaneously Rihito will try to deliver a second razor edge to cinch the fight.

Kengan Omega Manga Chapter 69 will officially release on 16th July 2020 under MangaOne and Ura Sunday (Shogakukan). It is a weekly scheduled manga written by Sandrovich Yabako and has a total of 5 volumes.

WHERE TO READ Kengan Omega Chapter 69 –