AMD has a special plan for its Ryzen series full of new entrances and their successors till the 2022.

Do you remember ‘that’ one nerd in your school who always topped the class, year after year? You could be the cool kid, worked in a style of your own, but were always the second best. Well, that’s the story of AMD and NVIDIA for me. Time and again, we see NVIDIA outclass AMD in the GPU space. Now, don’t get me wrong, I don’t go GaGa over NVIDIA. In fact, I always acknowledge that AMD has suitors of its own and it sells pretty well. Anyways, this is not to spark another battle between possessors of NVIDIA and AMD. This is to tell you that if the rumours are anything to go by, the cool kid is getting serious and is gazing at the nerd. AMD Ryzen roadmap of the upcoming two years has been leaked and boy oh boy it sounds wonderful.

If this was ever a Baptism competition, the hands-down winner for me would be AMD. A few months ago we saw the leaks of Warhol, the successor to the Vermeer generation of AMD desktop processors. Although, that was only a sneak-peek into Zen microarchitecture’s 3rd generation of AMD. A few more processors have come up in the latest snippets by MeibuW. We are thankful to VideoCardz for adding two in two and revealing the possible AMD Ryzen roadmap for us. Now a lot these next-gen offerings differ mainly due to the GPU that compliments them. The lineup is dominated by the presence of Vega GPUs and Navi 2 would only feature first in the Reimbart, a late 2022 offering. The real good thing here is that a spot for futuristic Navi 3 has also been reserved. This though would require us to wait for the Warhol’s successor, the Raphael, which won’t be making an appearance before 2022. 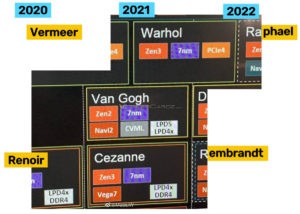 The newest product in this line mentioned is named after my favourite painter of all time, could be yours too. Van Gogh? Seriously, AMD? Just how creative could you get. There is, of course, the Cezzane too. The latter though would be partnered with a Vega GPU and Van Gogh with Navi 2. According to what’s revealed in the images, the Cezzane offers support for LPDDR4X and DDR4 support. Van Gogh, naturally a well-respected member of the family, will support LPDDR5/LPDDR4X RAM besides providing the convenience of Computer Vision and Machine Learning (CVML). This simply makes a perfect mouth-watering combination, do not ruin it for us with any changes AMD, especially if the changes are for worse. For now, I would avoid fanboying and go back to keeping an eye on NVIDIA’s Geforce RTX 30 series release.