The Ampere based GPU lineup of NVIDIA will be revealed on September 1, 2020.

NVIDIA finally put an end to wild guessing and teasing from its end, when it announced the launch date for its RTX 30 series. The online event will take place on Septemeber 1, 2020 as stated by the brand’s GeForce twitter handle. The RTX 20 series had been around for about two years now. It added to NIVIDIA’s success but two years for the same GPU line is a little outstretched. So it was only fair that something more exciting and adrenaline inspiring was brought into the mix. 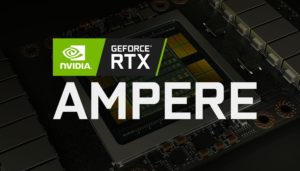 The Ampere based GPUs will be the successors to the Turing and Volta architectures. As mentioned in one of our other posts, the initial release of RTX 30 series will be marked by announcing four variants. We had earlier informed you about NIVIDIA’s plans of a beast of a GPU that will feature a 24 GB VRAM in the RTX 30 lineup. Interest has now shifted to companion variants. In the spotlight then, is the RTX 3080 Ti or RTX 3090, one of which would sport a 20GB VRAM. Models with 16 GB or 11 GB were supposed to be NVIDIA’s go through for this series, but we are not complaining one bit about an upgrade.

The memory bus for the 24 GB VRAM is definitely going to be in a class of its own, mostly the 384-bit. For the models that would sport 6GB VRAM and 8 GB, we believe the bit rate would be 198-bit and 256-bit respectively. A solid confirmation on this is still awaited but observing the trend that the RTX 30 series is following, a GDDR6X memory is highly likely to make an appearance in the complete line.NVIDIA is bound to receive competition from AMD with the upcoming RDNA 2 architecture. Its highly looked forward Big Navi GPU will also tend to unsettle NVIDIA. Amidst rumours that Intel is also readying its first GPU, the Xe-HPG, it would be interesting to see how NVIDIA fairs up against its rivals.

ColtOS 6.3 for Poco F1 is finally here with download link