Team EVGA released this information via their official Twitter handle.

With the Internet increasingly becoming the doorway to everything you desire, the chances of being misled are proportionally increasing, too. The tech industry thrives globally via the internet, be it in terms of news releases or over the air updates. Ecommerce has also been a big game changer on the Internet. But, as fascinating a place internet can be, it has also been a hub for many malicious practices. Amidst the most recent of such cautions was one released by EVGA in the wake of NVIDIA’s Ampere GPUs. EVGA took to Twitter to caution everyone about the recent developments with EVGA GeForce RTX 3080 orders.

Patience the name of the game with EVGA GeForce RTX 3080

American manufacturer EVGA in light of recent “bot” intervention with its records tweeted a cautionary message. @TEAMEVGA’s tweet read, “Important Note: We are hand reviewing orders for EVGA GeForce RTX 3080, any orders that are taken from “bot” will be rejected. Many users made an absolute ridicule of NVIDIA’s forum by imploding it with bots. Numerous bids were placed for the RTX 3080 model, none acknowledged and paid though. NVIDIA is trying its best to respond to the demand with RTX 3080 Founders Edition supplies to reliable retailers. EVGA took note of the same and felt that to wary its customers would be in everyone’s best interests. 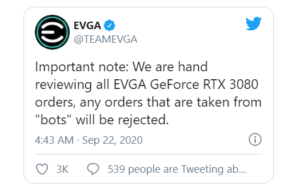 GeForce RTX 3090 will mark its debut in the market on 24th September and is expected to empty out soon. Retailers like Amazon, Newegg, Best Buy amongst others are devoted to keeping the bots far away from spoiling the party. Meanwhile, cautious messages have been doing the rounds around the Internet by PC Gamers and other users. They suggest that however excited you may be, do not fall for the overpriced fraud. The EVGA GeForce RTX 3080 is launched in two variants initially, HYBRID and FTW3.