Elden Ring: How to get the Tree Sentinel Armor?

Tree Sentinel Armor is one of the most iconic armor sets in Elden Ring that boosts your defense astronomically and is perfect for withstanding tougher enemies’ melee attacks. Depending on the player’s build, armor can play a significant role in the game that has been applicable in every soul’s title and it looks good and has a cool factor of its own. If you’ve endlessly searched for the armor in the game and are having a hard time locating it, we’ve put together a simple guide that’ll help you get the Tree Sentinel Armor. Continue reading the article to know more about the armor and how to get it. 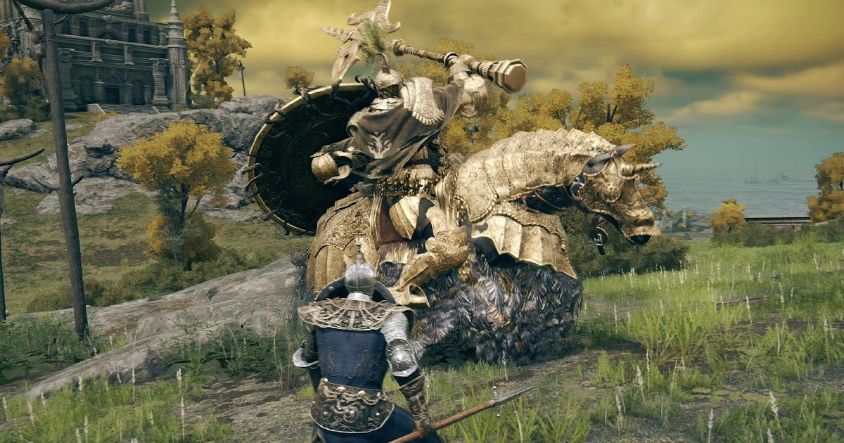 How to get Tree Sentinel Armor in Elden Ring?

The Tree Sentinel Armor can be found in Auriza Hero’s grave outside of the capital city, we’ve put together a screenshot so you can locate it with ease. Once you’re inside the dungeon, walk straight and turn right and keep heading straight and take cover from the death machines that come at you at super speed. If you’re a low level, it can one-shot you easily so proceed with caution.

You have to be very fast and dodge to the side otherwise you’ll get mauled by the death machines. Once you’re further inside, you’ll see red bloodstains on the floor, next to the corpse, you’ll see a ledge, jump down carefully. On the second ledge, walk straight and you’ll see an altar on the right, carefully jump down and take out all the enemies, they do release toxic gas so keep your distance, get inside and turn right and walk further.

Once you’re done, backtrack to the ledge that you came from and drop on the second ledge and keep going straight and climb the stairs. Avoid death machines and hide in the corner until it passes away, turn left and kill two skeletons and head straight, you’ll encounter a mini-boss. Defeat it and loot the chest, you’ll get Crucible Feather Talisman that can increase your dodge rolls but will increase the damage that you take.

After this, head back and this time, turn right and keep going until you stand on the lift. Now you’ll notice the flaming attack trap, dodge the flames and attack the pillar on the front to destroy death machines. Once it’s lowered, hit it again until it’s all the way up to the top. Once you get the imp sign on the pillar, dodge the flames that the statue spits, and quickly get inside and turn left, you’ll get a Great Dragonfly Head. Now, head back to the area where the Death Machines are located. Another machine will spawn in the area destroying one of the existing death machines. This will spawn the complete set of Tree Sentinel armor that includes Helm, Armor, Gauntlets, Greaves, etc.

We hope that you enjoyed reading this article, stay tuned for more updates about Elden Ring, guides, news, and more at Digistatement.

Elden Ring: How to get the Meteoric Ore Blade?