Counter Strike : Global Offensive (CS:GO) has become one of the most influential games in the first person shooter genre. It has spawned multiple eSports events and professional players. One of these CS:GO gods is the 24yr old former professional player Jacob Winnech. But today we are not going to talk about him. Instead we’ll take a look at his discontent with the game that he expressed on Twitter.

Yesterday, Jacob tweeted out that his complaints regarding the amount of cheaters and hackers present in CS:GO. The former professional states that the current matchmaking service has never been any worse than it is now. Jacob blames cheaters for it and requests Valve to take a closer look at it. He then says that he streams the game everyday for over 5 hours and the increasing cases of foul play encounter is really discouraging. 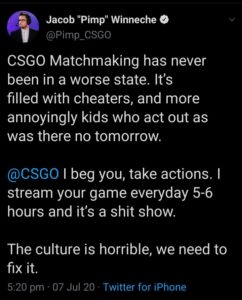 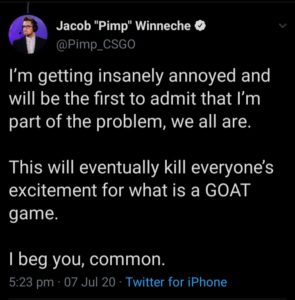 Cheaters in CS:GO have been ever present since the game came out and caught some traction. But this problem was only mild back then. Back in the day, you would only rarely run into a lobby with a cheater or a hacker in it. That being said, ever since the game peaked it’s popularity as paid title, Valve decided to push it out to a larger audience. The game was soon made free-to-play and thus invited more malicious players towards itself. 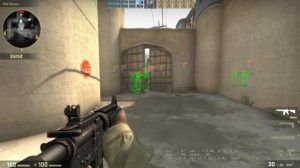 Within 24 hours of CS:GO becoming free, there were over 14 thousands negative reviews and reports for it on Steam. Most of them blamed cheaters for ruining their experience. After becoming a free title, CS:GO was available to a wider audience just as Valve expected. However this caused the increment in the cases of losing to unfair cheats such as aimbots, wall hacks and even mobility hacks. 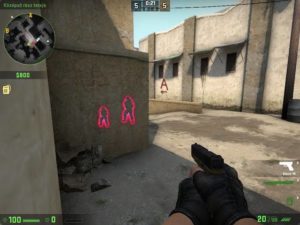 Eventually, Valve did take action against it. Recently enough in December, they banned over 600,000 accounts on Steam for suspected cheating. A newer title, Valorant has taken a harsh path towards dealing with this problem by deploying kernel level anticheat systems. Though Valorant’s anticheat promises better defence against cheaters, it’s parent company has faced many backlashes and controversies regarding user privacy. 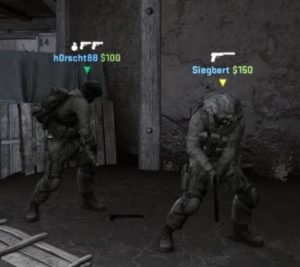 The battle against cheaters is still on going and we hope developing companies do find a way to eradicate this problem. So that honest players such Jacob Winnech do not have to give up on the game.