How to Reopne Closed apps in Android 11

The Android operating system from Google is the best service software and framework from the same. Google is popularly known for its apps and is a commonly used search engine. Android devices are the ultimate rivals to iOS devices. Both the products provide features that users long for and help satisfy them in the best possible way for a price. The upcoming Android OS version is Android 11. A couple of Android 11 builds/ updates have already rolled out as developer previews to test.

One of the most terrible things to happen is accidentally or unknowingly closing an app from the background. In this article, you will find out how to reopen the closed app and continue from where you left on the Android 11 device. But before that, check out some of the features of Android 11 details.

The final Android 11 Developer Preview as promised by the developers, Developer Preview 3 was released last month. If everything goes as planned, users will get the first Android 11 first Beta version this month (May 2020). Google Pixel mobiles and OnePlus devices will be among the firsts to receive the stable Android 11 update. As you can see in the image given below, the timeline of Android 11 builds and update roll-outs have been properly followed.

Android 11 marks the beginning of a new series for Android as the developers shift to numerical order with improved features and new functions. The most prominent features widely noted all across is the dark mode and battery optimization. Also, motion controls are exclusively released along with the update for the latest Pixel mobiles. Finally, other features include a chat bubble, scoped storage, and many more. To read our full-fledged article on Android 11 update details, timeline, and features, click the link below.

How to reopen closed apps in Android 11?

Follow the simple instructions given below to reopen the closed apps from the background. This is a small trick that only works on devices running on Android 11 as the builds are already out for a few devices and testers.

Make sure the “Recent Apps” highlight is active

Consider that you swiped up and closed an app by mistake

To bring it back, all you need to do is swipe down from the top. 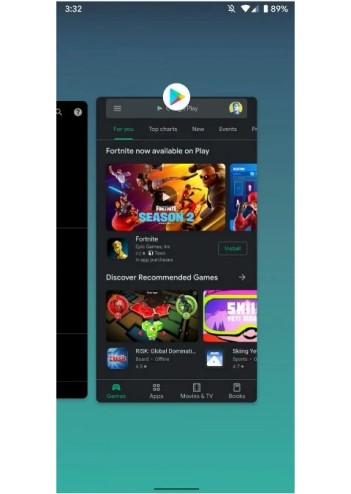 With that step, you will have the closed app back again on the recent apps tabs. Click and enjoy using the app from where you left. Also, users need to note that this only works when you swipe down from the top within a few moments of accidentally closing it.