Just a month ago, we were still publishing news related to a couple of devices that received an Android 10 update. Funny yet splendid how its September already as it is the month for the Android 11 update. Yes, fellow tech lovers and billions of mobile users around the world, Android 11 is out!

A couple of hours ago, Google announced and started rolling out the Android 11 update for Pixel devices, along with some third-party manufacturers like OnePlus, Xiaomi, Realme, and OPPO. And talking about mobile companies other than Google, most brands have already rolled-out custom UI updates supporting Android 11. For instance, OxygenOS 11 is out for OnePlus devices and OneUI 3.0 is soon to be up for public beta.

The update size for Android 11 is 1.72 GB as you can see in the screenshot below. Proceed with the Android 11 OTA download from the links below and enjoy the experience! 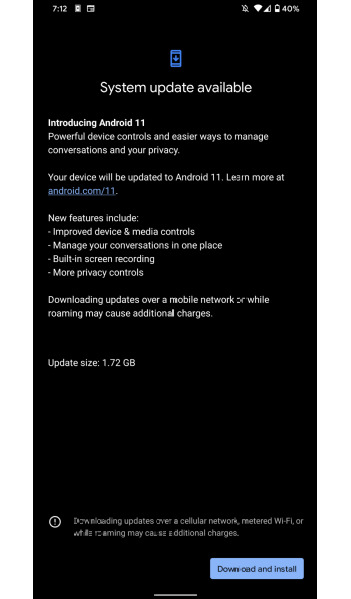 Users have been expecting to receive an Android 11 update since the 5th of September. As Google has officially announced the release of the stable update, most of you must have received the OTA update already by now. But in case you haven’t, grab the Android 11 update for your Google Pixel device(s) from the links below.

ROG phones and ZenFone devices will soon be receiving Android 11 updates, beta or stable. We will update this list soon as we get the OTA links for other ASUS devices as well (stay tuned).

OnePlus users can download or get an Android 11 update on their devices when they receive OxygenOS 11. Till then, users will have to wait. But lucky is the OnePlus 8/ 8 Pro users. The brand has officially released the first public beta version of OxygenOS 11 for OnePlus 8 and OnePlus 8 Pro users. The download links to get the update are provided below.

To get the Android 11 update, Oppo devices need to be updated to ColorOS 7.2, the custom UI skin for Android 11. Oppo has released a list of devices that will be receiving the second public beta of ColorOS 7.2. The list is provided below and as of September 9, 2020, you can check in the Settings of your device if you haven’t received a prompt to update your phone.

Realme has officially announced that the Realme UI 2.0 update will soon begin rolling-out for select Realme smartphones. Currently, we only have the update status for Realme’s flagship device- Realme X50 Pro.

As mentioned already, OneUI 3.0 for Samsung devices is all set to be released. The developer build was out in the month of August 2020. As of today, users are expecting the first public beta for OneUI 3.0. Here are the devices which will be the first to receive the update.

We post related content and exciting updates every day, so stay tuned! Also, share this article with all those who were waiting for the Android 11 update!