As things stand, AMD would be feeling really confident about their Radeon RX 6000 GPUs. RDNA2 promises to propel AMD’s GPU prowess in a similar direction as the Ryzen 5000s did to its CPU prowess. The American company has also struck a fine deal with Slovenian EKWB to produce special theme waterblocks for Navi GPUs. Now, all eyes are aimed towards finding how these Radeon RX 6000 GPUs perform. A few days back we wrote about Radeon RX 6800 XT that boasts of a 2577 MHz boost clock. Today, AMD disclosed more information regarding Radeon RX 6900 XT gaming performance.

I have always felt that the “A” in AMD could very well stand for audacious. The American manufacturer with its recent launches has cleared its intention to compete with the best. The likes of Intel and NVIDIA are all watching out as AMD is swiftly catching up. With the new Navi GPU lineup, AMD has directly claimed these GPUs go head-to-head with NVIDIA GeForce RTX 30 series. In latest performance reports, Radeon RX 6900 XT and Radeon RX 6800 XT were tested on Ryzen 9 5900X platform. A comparative bar graph featuring new Radeon RX 6000 SKUs and NVIDIA’s new Ampere GPUs was published. 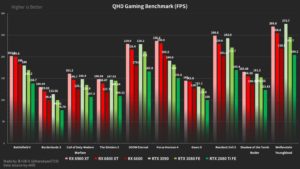 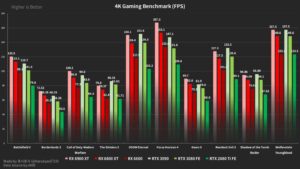 It compares performances of the 6 GPUs in 4K gaming. The games include Battlefield V, CoD Modern Warfare, The Division 2 Gears 5 etc. Elsewhere in a recent turn of events, NVIDIA is offering Call of Duty Cold War as a game bundle with GeForce RTX 30 series. They haven’t ditched Watch Dogs Legion, but it’s more like a limited period festive offer choice.