Yesterday saw AMD pull the curtains off its next gen Radeon RX 6000 series GPUs. The build up to this launch was fueled by a GPU codenamed “Big Navi” doing rounds on the internet. In some ways, what the Zen3 was to Ryzen CPUs, RDNA2 would be to Radeon GPUs. AMD announced three SKUs in their event, Radeon RX 6800, Radeon RX 6800 XT and Radeon RX 6900 XT respectively. To our delight, Slovenian company EKWB revealed waterblocks for RX 6000 GPU series. The water blocks look pretty crisp by design and are painted to please the Red brigade. We don’t have any complaints but as they say, looks are subjective. 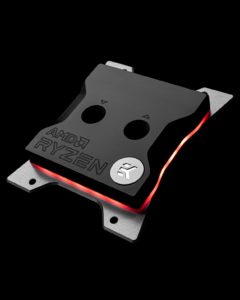 It is clear here that EKWB and AMD have collaborated, but we have to see exactly which GPUs will feature these stylized cooling parts. For one, they could be made available as accessories throughout the Radeon RX 6000 lineup. However, it would be interesting to see if they are compatible with all three announced SKUs. All these feature a 16GB non-X GDDR6 memory and Radeon RX 6900 XT having 80 Compute Units. In EKWB’s terms, the teaser of the water blocks should make the perfect red carpet for the entry of Big Navi GPU. Well, the design on these certainly divides opinion. Some would have preferred less text littered over these, while many these days are suckers for the premium matte black. Nonetheless, the specifications prove that AMD’s Navi family has what it takes to match NVIDIA’s RTX 30 series.