Last year Asus made a surprise comeback in the highly competitive mid-range segment with the Zenfone 6. Boasting a flagship Snapdragon 855 processor it came with up to 8GB of RAM. The display was 6.4-inches with a resolution of 2340 x 1080. Powering all of this was a massive 5000mAh battery, which was not as common back then. This allowed the phone to easily have a 2-day battery life. And despite its large battery, it still managed to fit in a headphone jack.

But this was not its only unique feature. The Zenfone 6 also had a flip camera. This meant the dual camera setup at the back which consisted of a 48MP main camera and a 13MP ultrawide could be flipped around to act as selfie cameras. Not only did this allow the phone to have a true full-screen display without any notch or punch-hole, but it also meant that it arguably had the best selfie cameras on the market. Users could take high-quality selfies with the main camera or use the ultrawide to capture a lot more of the scene.

While some users were worried about the durability of the flip camera, there have been no widely reported issues. Asus launched the phone in India as the Asus 6Z due to a trademark issue. Fans are no doubt excited to see what Asus will do next.

While we do not know much as of now, a previously leaked Geekbench listing for a phone with the codename ‘asus ZF’ suggested that Asus will be using the Snapdragon 865 and 16GB of RAM and Android 10. In other reports, Asus is expected to continue with the flip camera but increase the number of lenses. They are also expected two introduce two variants: the Zenfone 7 and the Zenfone 7 Pro.

Today, a listing on the Bluetooth certification website has confirmed the existence of the Zenfone 7 Pro variant. Reddit user u/Sam65362 claims that existence of both the variants has been confirmed and that either one or both will keep the flip camera. 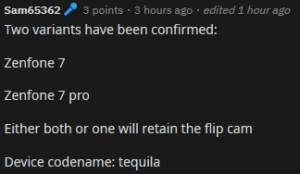