However there is no official release date as of yet

The Vivo V11 Pro was launched in 2018 as part of Vivo’s mid-range lineup. It had a 6.41-inch Super AMOLED display with a resolution of 1080 x 2340. It housed an octa-core Snapdragon 660 and 6 GB of RAM. Powering all of this was a respectable 3400mAh battery. For its rear camera setup, it sported a 12MP main camera and a 5MP depth sensor. The front selfie camera was a 25MP shooter.

While it had standard specs, it did bring two standout features for a mid-ranger in 2018. Just as Vivo was the first company to introduce the under-display fingerprint scanner, it was also the first to try and bring it to the mid-range. It also had a water-drop notch, a first for the V-series. This was pretty exciting compared to the larger notches in other mid-rangers.

It came with FunTouch OS 4.5 which was based on Android 8.1 Oreo. Now FunTouch OS has not always had the best reputation. It is often accused of being loaded with too much bloatware and borrowing too heavily from iOS. But it does have its fans for the huge number of extra features it offers. The latest version is FunTouch OS 10 which has already been released for Vivo V11 Pro devices. But V11 Pro users still have not received the Android 10 update.

Now a tweet from Vivo has revealed that they are working on an Android 10 update for the device. The tweet was from Vivo India’s official Twitter handle. There has been no official release date confirmed yet. 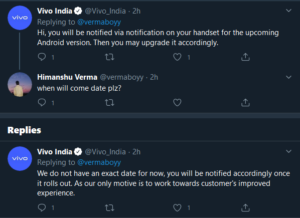