Realme and Redmi are the two brands that are currently ruling the mid-range smartphone launches. Redmi has always aimed to provide feature-packed devices at an affordable price and on the other hand, Realme targets in bringing premium level gadgets as presentable as possible at a reasonable price. The upcoming Redmi device that is yet to be launched is the Redmi Note 9 and for Realme, its Realme 6.

Coronavirus, primarily, has cost hundreds of lives together. And the rest of the world that’s safe and sound is being affected by the impact of the virus on the people at work. As this contagious spread of the deadly disease shows no halt, both Redmi and Realme have called off the launch event of their upcoming devices and here’s all that you need to know.

Redmi Note 9 is a mid-range budget device that was all set to launch on an event held by Xiaomi on the 12th of March 2020. But due to safety reasons, the event has been called to avoid any impact on the media, audience or officials to face any health issues threatened by Coronavirus. The official twitter account of Xiaomi has updated the audience about the same (refer image below). 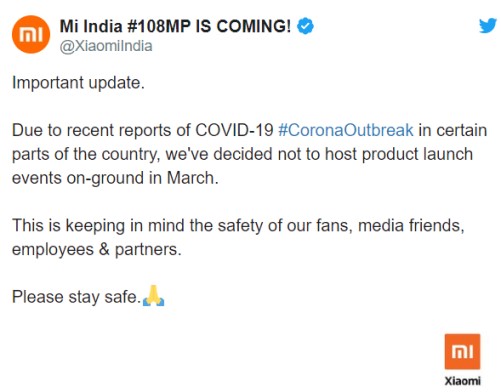 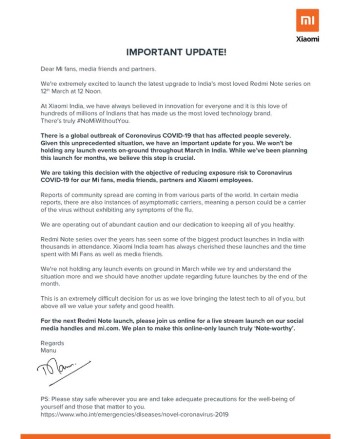 Though the launch event has been canceled, pay attention that only the on-ground release has been called off. The Redmi Note 9 will still be officially announced and launched on the given date, but online. Along with the Note 9, the Redmi Note 9 Pro is the other device that has joined this list.

Realme 6 is a complete mid-range beast that was all set to launch on the 5th of March 2020. But the planned event for the launch of this device has been called off to avoid the people that would gather to be exposed to the COVID-19 virus. Keeping the safety of the people in mind, Madhav Sheth, CEO of Realme Mobile tweeted the following (refer image below). 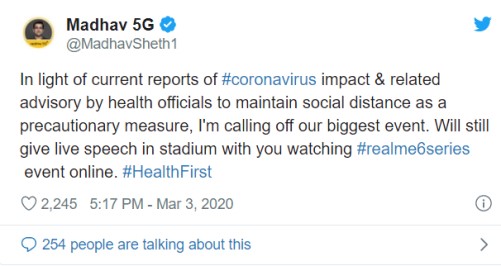 Thought the on-ground event has been called off, the device will still be officially announced and given a boosted launch on the 5th of March 2020 at 12:30 PM in an online event that will stream in the official Realme YouTube channel. Also, Realme 6 Pro is the other device that will be joining this list.

Rest assured, we will update this article when we receive any news about the launch of Redmi Note 9/ 9 Pro or Realme 6/ 6 Pro, so stay tuned. Also, share this article with all those who are waiting for these devices.