Xiaomi Mi A3 Android 11 update release date, current status & everything that you should know

The Chinese multinational company Xiaomi has emerged out to be pioneer in technology and innovation in the last two years. The Xiaomi devices runs on Android OS and have its own custom UI called MIUI.

The latest version of Android – Android 11 was released by Google on September 8, 2020 with pixel devices. The new Android is not yet available in stable mode but the big tech-brands like OnePlus, Nokia and Xiaomi are already lined up to receive the new android update.

But it seems that the users of Xiaomi Mi A3 have to wait a little longer to receive the Android 11 update. A popular tipster and twitter user “Xiaomi MI A3 Unofficial” posted the screenshot of the conversation with Xiaomi official custom support. Have a look at the screenshot below: – 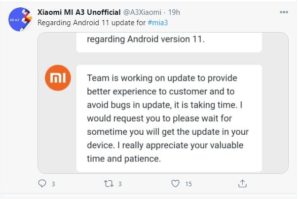 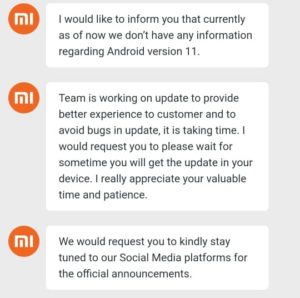 It is confirmed from the post that the company has no plans yet regarding launching Android 11 update for Xiaomi MI A3.

The Xiaomi team is working collectively with Google to avoid any bugs/issues in update. The customer support also confirmed that eventually the Xiaomi MI A3 will be receiving the Android 11 update but it will take some time.

To keep getting updates and other official information and announcements, you are advised to keep following the Xiaomi on social media platforms.