FNF is a major hit when it comes to rhythm games. It has amazing charts, amazingly built characters, and funky music. But every wondered who created Friday Night Funkin? Read our blog to find out the main guy behind this amazing game. 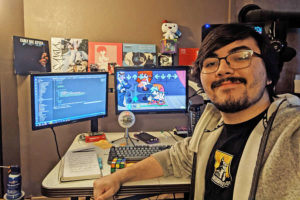 Friday Night Funkin is regarded as one the best rhythm games ever to exist to date. In essence, it provides a complete package of captivating music, wavy beats, amazing charts, and artistically crafted characters.

The game revolves around the story of the protagonist, “The Boyfriend”. Boyfriend wishes to date “The Girlfriend,” but is unable to do so due to her father, “Daddy Dearest,” a former rock star who is opposed to the relationship. He must beat an array of odd and unreal characters in different rap battles in order to win his girlfriend.

In this game, you have to complete several levels known as “Weeks,” each of which contains three songs except the second week. You’ll have to pass 6 weeks and also the 7th week which will be released soon.

It’s also an open-source game, so there’s plenty of space for people to show off their coding and composition skills by introducing innovative mods to the game.

The main guy behind this amazing game is Cameron Taylor. He is most famously known as Ninja Muffin 99. Cameron Taylor is a Canadian programmer who is also known for creating games like Ritz, Paristroyer, Monster mashing deluxe, and many more.

Taylor is responsible for writing the game’s code and getting it to work. He was the one who came up with the game’s idea and put together the rest of the team to help him make it a reality.

Ninjamuffin99 had learned about a game called Ludum Dare 47, which would begin in a few hours. Taylor had already determined that the game he wanted to make would be a rhythm game before the jam’s theme was announced. Then he reached out to Kawai Sprite for the game’s soundtrack. He finally came into touch with PhantomArcade and evilsk8r after spending some time looking for artists. With the team assembled and a 72-hour weekend ahead of them, they set out to create the prototype for Friday Night Funkin’.

The game was eventually released to Newgrounds on the 1st of November. The game’s sound, elegance, and art design had earned a lot of positive feedback and high praise. Ninjamuffin99 has confirmed that he wants to see the game released on other platforms such as Steam or the Nintendo Switch once the full game has been developed for at least 10 weeks.