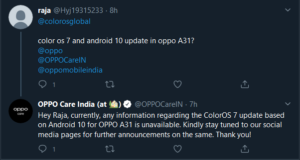 Now while the specs might be decent for a budget smartphone, the fact that it ran Android 9 out of the box was pretty disappointing. You would think Oppo would have updated the phone to Android 10 by now, but A31 owners have not had any such luck yet. Today Twitter user @Hyj19315233 enquired if the Oppo A31 would be getting the ColorOS 7 and Android 10 update. Oppo Care India replied that currently there is no information regarding the ColorOS 7 update based on Android 10 for the device. While this does not mean that the A31 will not be getting these updates, it does look like that updating the phone might not be on Oppo’s priority list.

And that leads me to think about the whole value debate around budget phones. Sure, the iPhone might be really expensive, but Apple delivers 5 years of updates. And if you spread the cost over five years, suddenly it does not look that bad. A budget phone might be cheaper in the beginning, but the lack of proper software support or just one year of updates might make you want to get a new phone much quicker. We hope Oppo starts offering better software support, so these phones can truly be “value-for-money”.