The GeForce RTX 3090 will be available 24th September onwards.

How do you feel when a guest you are eagerly waiting for changes their plan at the last moment? NVIDIA is being our naughty guest this time. The GeForce RTX 3000 series enjoyed a successful launch with the Green army excited to get their hands on it. The wait will come to an end shortly but a few last-minute changes that you should be aware of. The RTX 3080 formal review and spec sheet was supposed to be released by Monday. So if you thought the wait was coming to an end, wait a little longer. This will now happen on Wednesday, the 16th. NVIDIA had previously planned to release the official reviews for its Founders Edition on Monday.

NVIDIA also pulled the RTX 3070 bunny out of their hat. Initially, there was lots of ambiguity surrounding the it with little knowledge about its specs. That was recently cleared out. The RTX 3070 sports 5888 CUDA cores and will be complemented by a non-X GDDR6 8GB memory. Running on a 256-bit bus at 14Gbps, RTX 3070 is second-best only to RTX 3090 in GPU utilization capacity figures. NVIDIA’s official message also says that the RTX 3070 will be available in the market from mid-October onwards. However, NVIDIA has not made any changes to their plans for RTX 3090 Founders Edition as per latest sources. It will go on sale from the 24th of September. 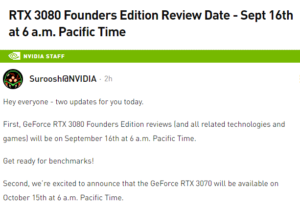