Warhammer series often introduces ingenious ideas into its games from RTS, third-person shooter, and card games, and Warhammer 40K: Shootas Blood and Teef take it to a different level. If you wanted to play from the perspective of let’s say an Ork with fun-filled mayhem, gore, lots of firearms, puzzles, and a badass soundtrack, this sidescrolling platformer is sure to hook you up with countless hours of gameplay.

Based on the trailer and gameplay impression, many are wondering if Warhammer 40K: Shootas, Blood, and Teef will get a port on mobile and we’re here to explain every detail of what to expect from the new spinoff title. Continue reading the article to know more about the game and if it’ll be arriving on Android and iOS. 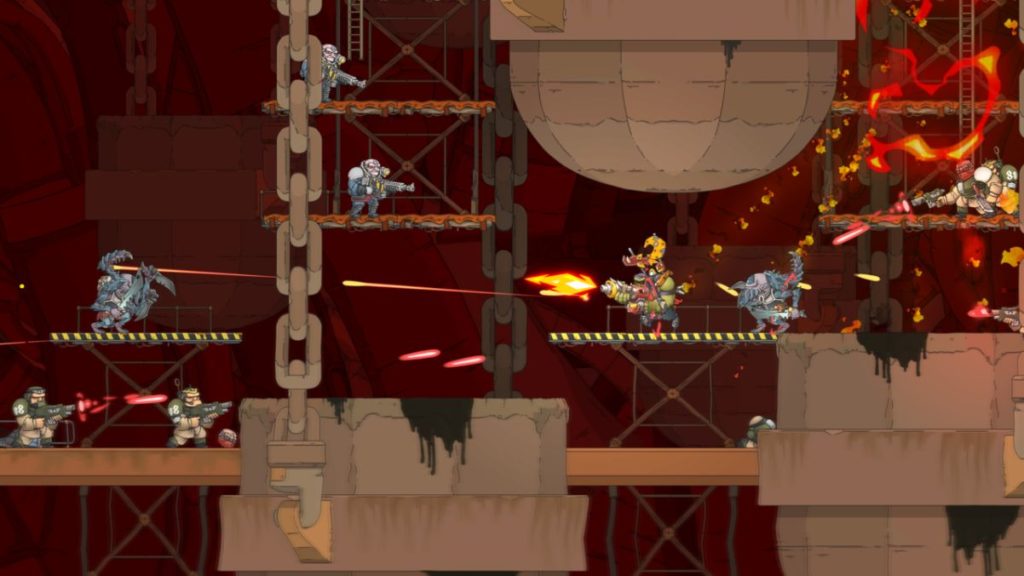 The story of Warhammer 40K: Shootas, Blood, and Teef is very straightforward as you have to assume the role of one of the Orks, who have been betrayed by Luteus Alpha overlord. You have to fight your way through humans, orks, and other enemies that’ll hinder you in your path and reclaim what you have lost, your precious hair squig.

Unlike most of the Warhammer games where you have a third-person or isometric camera, Warhammer 40K: Shootas, Blood, and Teef is a sidescrolling action platformer that centers around four different ork characters that have different passive abilities & throwables for players to use to finish off their enemies. Players will have to experiment with characters and determine whether they suit their playstyle and creatively make use of their abilities to kill enemies.

For this Warhammer entry, players will get to experience the immersive sidescrolling platformer very soon. According to the official website and dev’s statement, the game is releasing globally on October 20, 2022, now dubbed as “Ork tober”.

Is it coming to mobile?

It is not surprising if people think of Warhammer 40K: Shootas, Blood, and Teef as a mobile game as most sidescrolling platformer games do tend to release on Android and iOS, and the mechanics of the game are also similar to that. Unfortunately, it isn’t planned for mobile devices and won’t be released on it anytime soon. It is arriving on PS4, PS5, Xbox One, Xbox Series X/S, and PC. If the game does get an announcement for a mobile release, we’ll keep you updated ASAP.