After the release of the patch 0.50 for Valorant earlier this week on May 12, many players have had complaints regarding the broken hitboxes in the game. Since the initial few grievances on Valorant’s subreddit and a couple other independent threads, many complaints have surfaced with players facing similar issues in their game.

When this issue first came up after update 0.50, players thought that something must be off with their gameplay. However due to the rise seen in the amount of complaints it soon became clear that the issue was not with them, but with the game itself. Players have reported that they notice multiple shots hit their target and often see 5-6 hits land but the hit info only displays 0-2 hits. Even with proper crosshair placement and recoil management, hitting anything seems difficult now. This is especially the case when the enemy is in crouching position, and the head is impossible to hit. 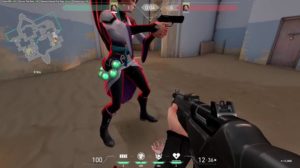 Others say that this has nothing to do with the new run to walk changes as the same issue is prominent with the enemy standing as well. Broken hit registration has also been pointed out as sometimes when only the enemy model’s head is visible, upon firing shots hit chest and even the legs! This has nothing to do with your ping because such phenomenon has been noticed on ping as low as 20-30 ms.

On a Reddit thread it was brought up that players can observe other player’s going through the same issue by switching to spectator mode. The bullet tracers were seen to hit their target and sparks were seen flying off of helmets but the feedback was not equal to the server calculated hit. Even at point blank range broken hitboxes resulted in unfair player deaths. These broke hitboxes are especially noticeable with pistols due to their single firing mode as you can clearly trace each bullet hit its target and cause no damage to the enemy at all.

Along with broken hitboxes and broken hit registration, random packet loss spikes were also observed. These issues have made the current state of the game somewhat unplayable and they have resulted in shattering players’ confidence. So far Riot has not yet commented on or addressed this issue and players are left wondering what will happen next.