Valorant is a very well-received game by the gaming community right from its announcement and closed beta testing. The game enjoyed notoriety in its very early stages and the developers immediately launched its global versions after a few months of testing. Such small corners can sometimes become a big upset for the players.

From time to time, Valorant players have frequently encountered bugs, glitches, and fatal errors while playing or trying to play the game. And while Riot is quickly attempting to patch out these problems, some of them still go under their notice.

Now players are repeatedly facing error code VAL 43 – “There was an error connecting to the platform. Please restart your game client.” This had become somewhat a common error, though, there’s no decisive solution. Sometimes, running the game as administrator might fix error 43 temporarily. This error generally occurs when Riot Games is shipping a new update or the game servers are under maintenance. This irritating bug not only prevents players from playing Valorant but also disallows them from launching the game. 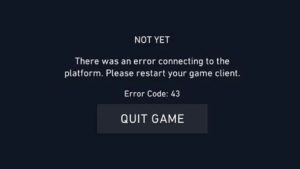 Riot games are very great at maintaining their servers but still, some issues slip-up. Code 43 error is a similar problem that is happening due to some small issues in the game. We have mentioned a workaround below which might fix your issue. Have a look at it down below.

1.Go to your %AppData% folder and delete the RiotClientPrivateSettings.yaml file.

2.Run Valorant as Admin after deleting the file.

This causes you to re-login to your account which will fix the Code 43 error. If this won’t work for you then, However, the problem is occurring worldwide due to technical flaws in their servers, your best bet is to wait patiently in hopes that Riot fixes this problem themselves.