The sandbox video game developed by Mojang, Minecraft has turned out to be a major hit in the last decade. Known for being a game that gives the players complete freedom to build anything they want this game has made millions of people their loyal fans. Although people already love the game just the way it is, you can definitely make this game even more interesting by adding some mods in it. So, here are the Top 10 Minecraft Mods (1.16.5) for March 2021: 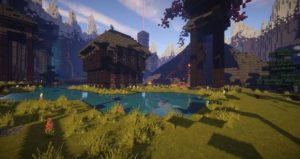 Mr. Crayfish’s Gun mod is one of the highest quality gun mods you’ll find in the game. It would be safe to say that this mod can compete with the Vix modern warfare. But when it comes to 1.16, it is the best gun mod available so far. It adds a good amount of new guns to the game and you can also put attachments on them so you will be able to customize these guns even further. This mod is really interesting and is definitely worth a try.

The mod adds a bunch of massive new ships to the game. The regular mods in the Minecraft game are pretty small so this mod makes the waterways much more interesting. It is a newly added mod but is surely on its way to add some really cool features in the future.

This one of the coolest mods which has three new functions to the game. It lets you crawl, climb a ladder, and gives you the ability to sit anywhere, yes, literally anywhere. It is a very simple mode so it will easily integrate pretty softly into the game.

This mod doesn’t directly generate apples into your world, but it does let you plant its saplings. You can further turn the apples into a renewable resource for your base. Interestingly you can also turn these saplings into golden apple trees.

This mod adds fans to the game and allows you to blow entities around. You can add several different tiers of fans so you can have low-tier fans or fans that can completely launch you up in the sky.

This mod is pretty similar to the Portal Gun mod that is still made for 1.12. It combines two amazing games together via a portal.

This mod not only replaces all of the texture with 3D models for all the ores but also adds a massive amount of new ores to the game. Each of them has armors and tools that you can make, so you’ll be able to make a substantial amount of new things in the game.

This mod adds several vanilla-friendly features to world generation. While you’re walking around in the game, you’ll find piles of sticks on the ground or seashells on the beach. In conclusion, this mod adds interesting details to the game.

This world generation mod will improve default vanilla biomes and also will add a couple of new ones. With this mod, you’ll be able to find a couple of new mobs in the game too. In case you’re wondering, this mod is compatible with the vibrant journeys mods, so now you’ll easily be able to use both of these mods together.

The Crimson Mood mod adds a randomly occurring event to the called Crimson Moon. When this event occurs the moon will be completely red along with the sky and the lighting. It might make surviving a little harder because tons of mobs will start respawning due to the Crimson Moon, but hey, who doesn’t like a challenge right?

Don’t forget to try these amazing mods out and happy building!

Friday Night Funkin' Scratch games: What is it and Where to Play Online?