by Neha Chaudhary
in Entertainment, News
0

The good doctor is an American medical drama, based on the 2013 award-winning South Korean series with the same name. Actor Daniel Dae Kin began adapting the series, and in discussing this with his team and other creative’s, they started to work on it.

It is developed by David shore and composed by Dan Romer. It has a total of 3 seasons from which the third one is on air. The running time of the show on t.v is 41-44 minutes. The first episode of this show aired on 25 September 2017.

The last episode (19) was aired on 23 March 2020 and now the fans are a little impatient about the next RELEASE date of the next episode. Few of the fans have even taken their twitter handle and said that they have been waiting for the next episode for so long and are curious to know about their loved couple Shaun and Carly relation.

The next date on which the show is going to air is 30 March 2020. This episode is named “ I Love You.” As this episode is the season’s finale, it will be quite interesting to watch.

We will see an emotional kind of episode, and there will be love and Disaster at the same time. We will see that Disaster will strike as a massive earthquake all over the city, San Jose. There will be a lot of chaos due to the earthquake, and people will be left in a panic situation, and all this will leave all the hospitals and their staff on high alert and lives under threat. 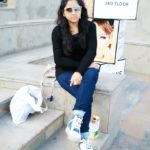 Neha is a budding writer and a graduate from Delhi university in B.A. Philosophy honors. She is an ardent follower of the fiction entertainment industry and loves to read and follow comics, box-office smashing superhero movies and TV series. Apart from writing, She invests most of the time sketching and designing fashion arts.