Surgeon Simulator 2 is the one such game that lets you enjoy the surgery in a fun way, that too with your friends. But what if you are not able to play the multiplayer mode of this game with your friends due to some issues like, friends not showing online, party disconnections, etc.? This is happening in this game and if you are also one of the sufferers, read the full article to know everything about the fix of Surgeon Simulator 2 Multiplayer Issue.

Surgeon Simulator 2 is the recently release surgery simulation action-adventure game developed and published by Bossa Studios. It is available to play on Microsoft Windows, Xbox One, and Xbox Series X|S. As the name of this game justifies, it is a sequel to 2013 released, Surgery Simulator. Since the release of this game, it has witnessed high demands. The chaotic gameplay that this game’s predecessor offered has been said to be doubled due to the introduction of the new multiplayer mode resulting in high demands of this game. But, this multiplayer mode of this game is troubling many players out there. Here is everything you need to know about this issue and its fix.

As we have mentioned above, this multiplayer issue is annoying many players by sometimes, disconnecting their friends, or friends not showing online. The developers have clearly addressed this issue. They have confirmed that this issue is occurring due to server incompetency. Due to the unexpectedly high demand for Surgeon Simulator 2, the game servers were overwhelmed. Check the full statement in the snippet below: 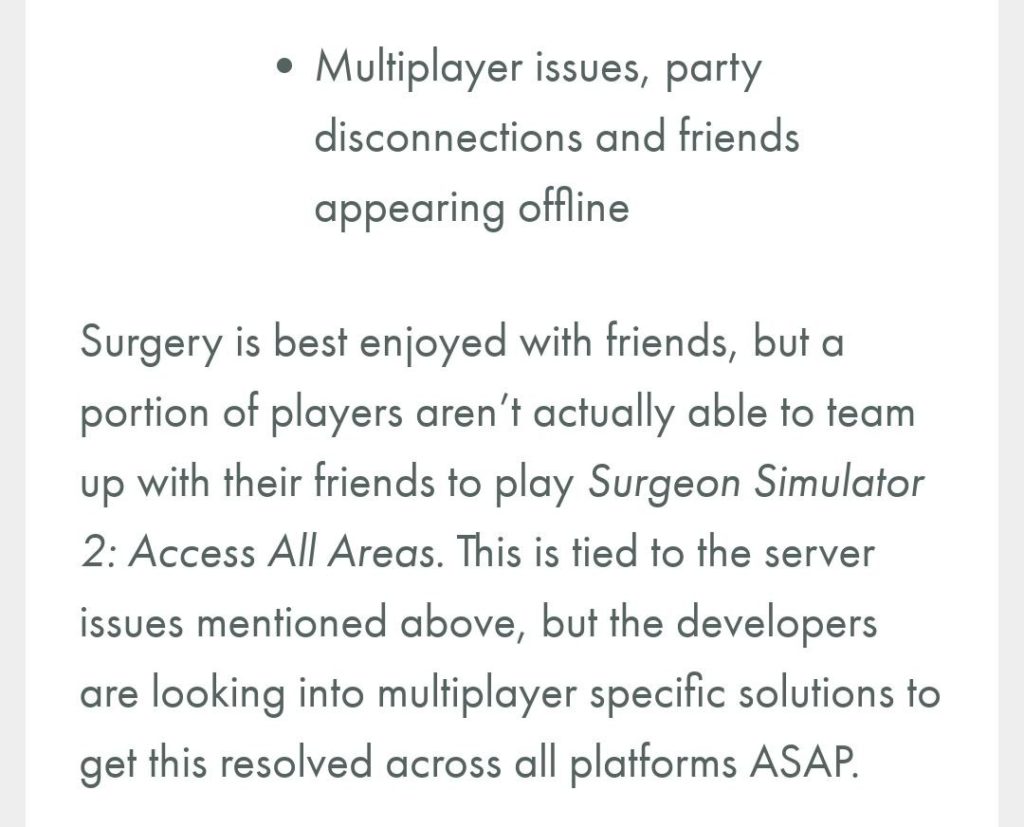 But, there is a piece of good news too. This issue is being looked into by the development team and they will be announcing some multiplayer-specific solutions to resolve this issue across all platforms ASAP.

So, this was all about the Surgeon Simulator 2 Multiplayer Issue occurring due to friends not showing online, party disconnections, etc. If you found this article helpful, share it with your friends.