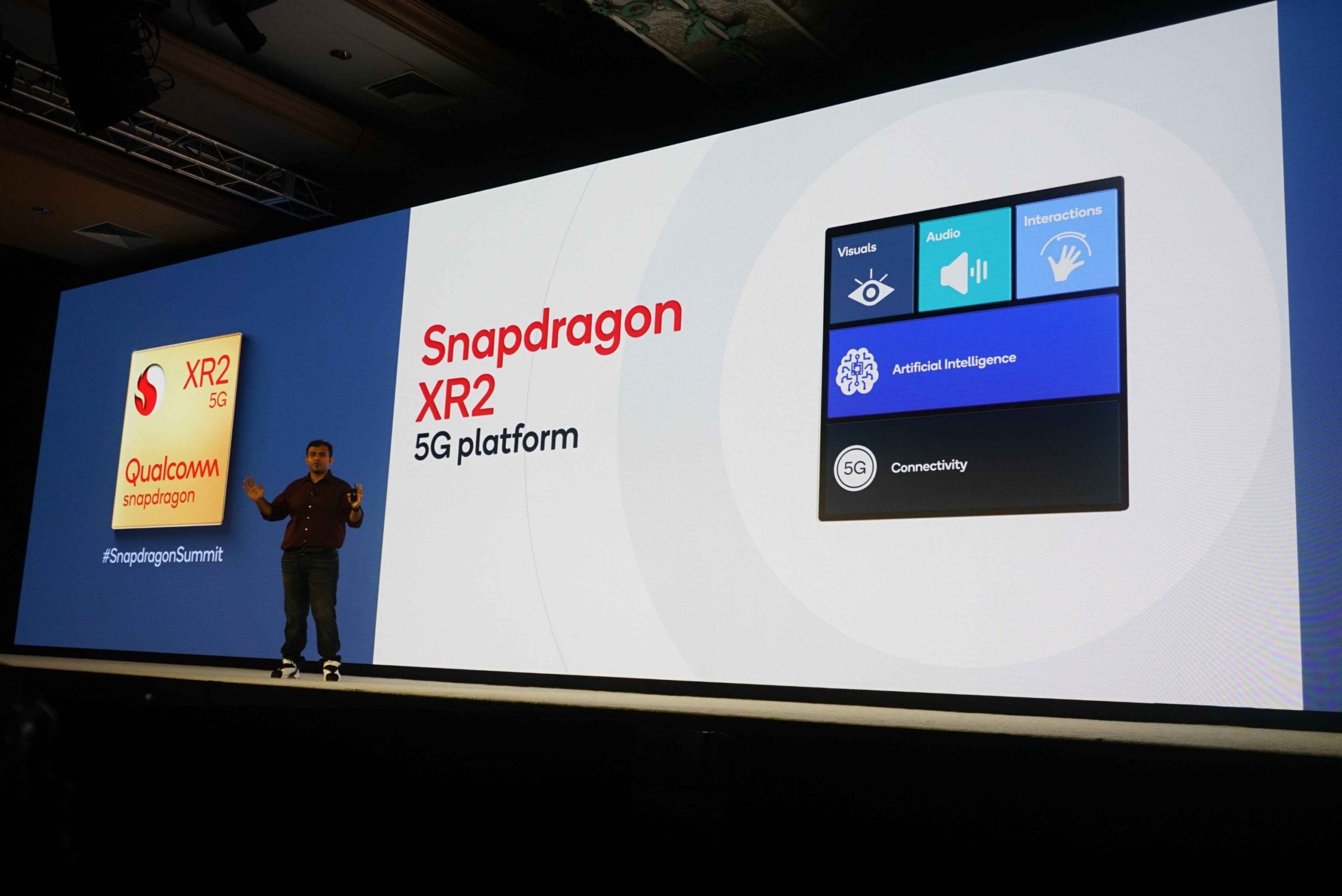 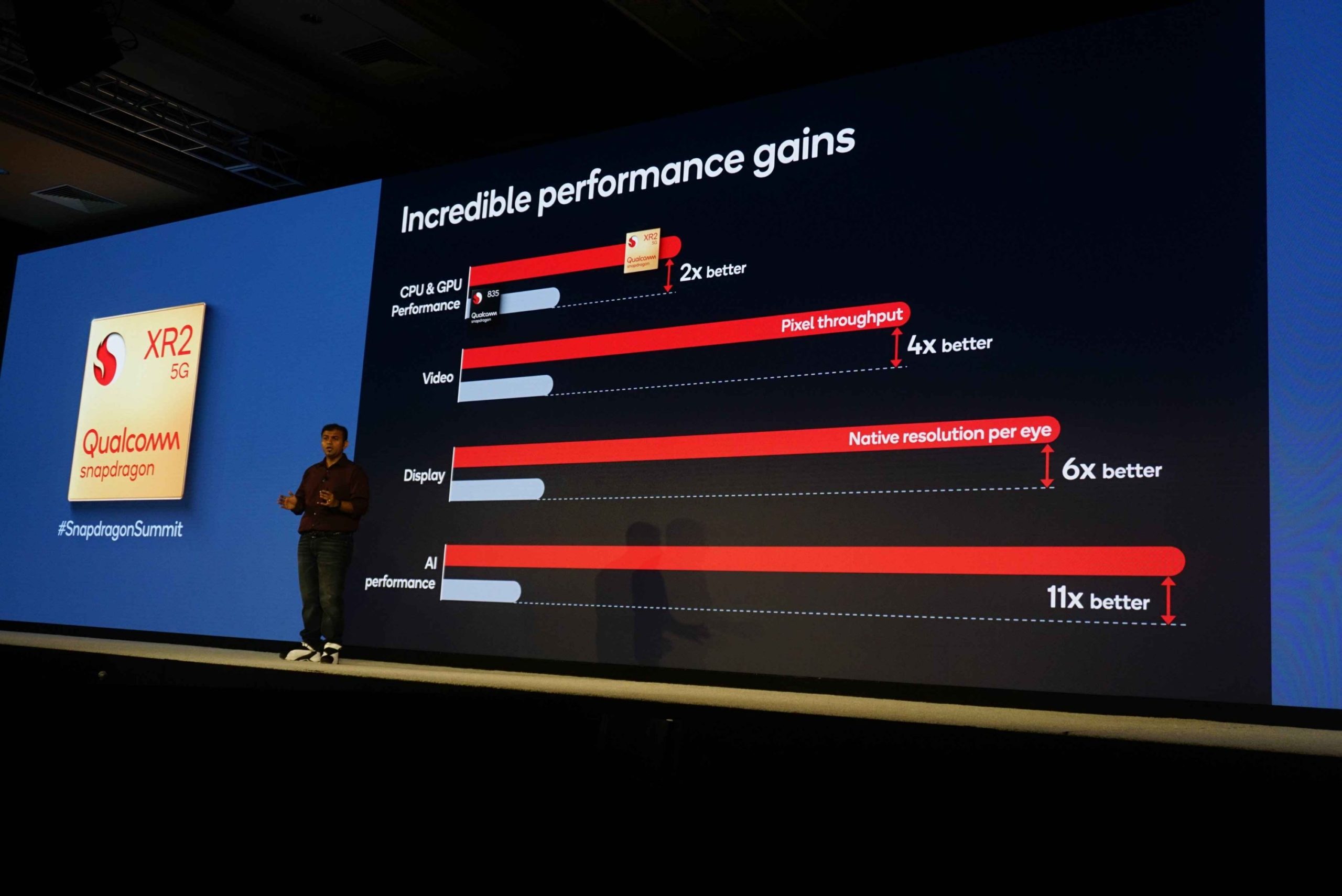 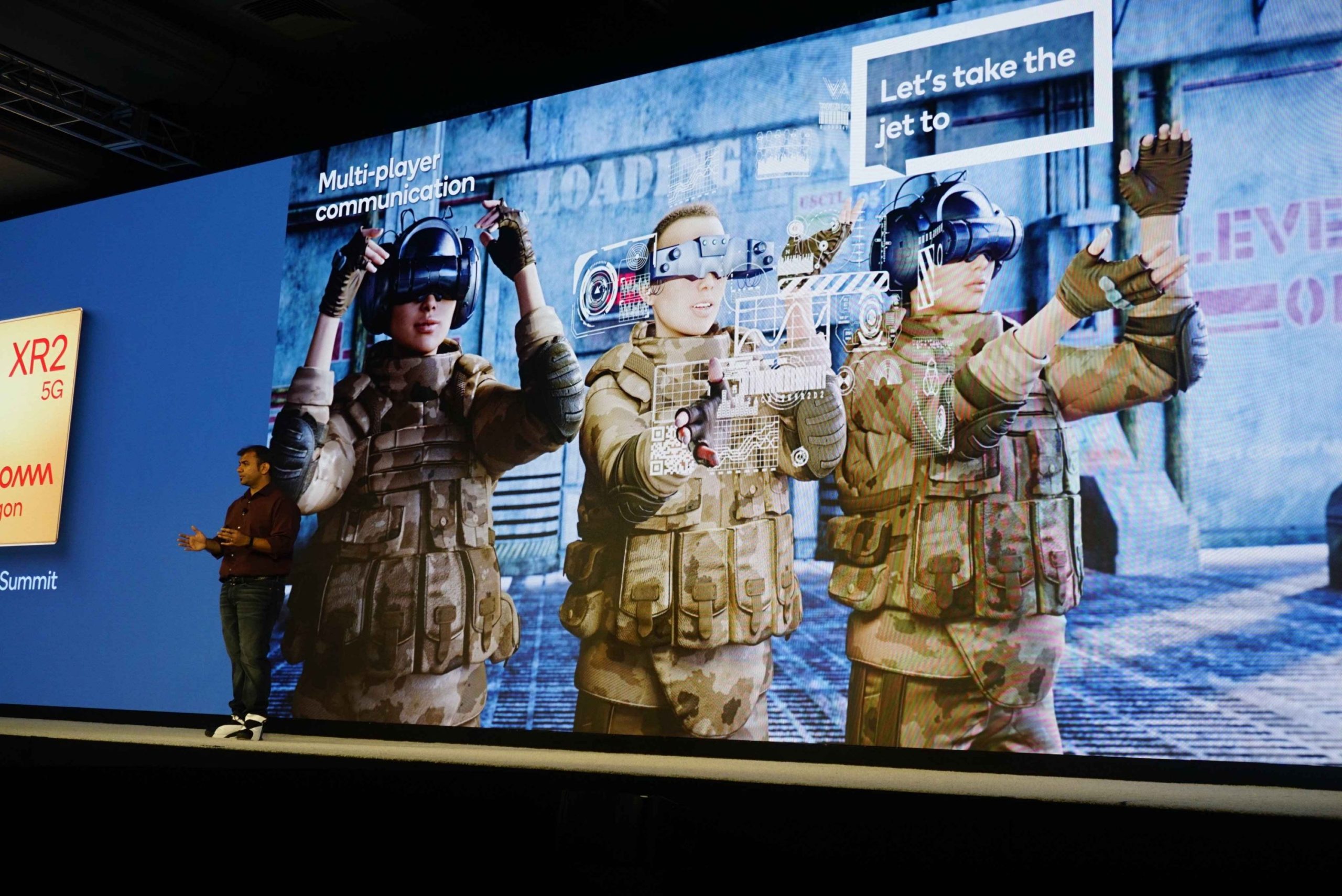 Also, Snapdragon XR2 is the world’s first to enable 7 concurrent cameras — with semantic segmentation, no less — for all kinds of tracking and intuitive, natural reactions.

Visuals: In order to experience a heightened sense of realism in XR, it is imperative to close the visual gap between the real and virtual world. This requires cutting-edge display and graphics. The Snapdragon XR2 Platform takes a leap in core GPU processing by supporting 1.5x the pixel rate and 3x the texel rate for efficient, high graphics rendering1. XR specific features like foveated rendering with eye tracking and enhanced variable rate shading for smoother refresh rates help render heavy workloads, while maintaining low power consumption. The Snapdragon XR2 display panel offers up to 3K by 3K resolution per eye at 90 frames per second (fps) and is the first XR platform to support 8K 360o videos at 60 fps for photorealistic visuals in streaming and local playback. Custom silicon was developed for unique AR displays to help reduce overall system latencies to maintain immersive AR experiences.

Interactivity: With XR, for the first time a user can be virtually teleported to a new environment. To do this accurately and efficiently, the Snapdragon XR2 introduces support for seven (7) concurrent cameras and a custom computer vision processor. Multiple concurrent cameras enable real-time and highly accurate tracking of the head, lips and eyes together with 26-point skeletal hand tracking. Computer vision provides highly efficient scene understanding and 3D reconstruction. Together, these features allow users to be transported to new environments where they can intuitively interact within a digital world.

Audio: In an augmented or virtual world, sound is the key to every immersive encounter. The Snapdragon XR2 Platform offers next-level audio layers in a rich, 3D spatial sound while providing crystal-clear voice interactions to deepen immersion. The platform has a custom built always-on, low power Qualcomm® Hexagon™ DSP to support hardware accelerated features like voice activation and context detection to help keep users’ head in the digital world, while having an ear in the real world.

AI & 5G: Two technologies shaping the future of communications and computing are AI and 5G. Qualcomm Technologies is leading the way in driving these technologies across mobile computing, including XR. Multiple Snapdragon XR2 features have been improved using AI, including visuals, interactivity and audio in order to immerse users in a smarter reality. The Snapdragon XR2 Platform is the world’s first XR platform to support 5G connectivity, which has the potential to unleash a tidal wave of innovative XR experiences that require low latency and ultra-fast data speeds.