Processors of a device decide the functions and efficiency of the same. The best of processors, which is the combination of CPU and GPU, certainly conveys how smooth and capable gadgets are powered. Qualcomm is a tech company that produces Snapdragon chipsets. These chipsets are in various series and power numerous smartphones of the present day. Above all, Snapdragon chipsets are pioneers and run the best of devices out there. The latest version of Snapdragon chipset released is the Snapdragon 865.

After the launch of Snapdragon 855, we saw an even powerful chipset, Snapdragon 855+, that runs on the basics of the same. Users were looking forward to the release of Snapdragon 865+ chipset in the second half of the year 2020. But it seems like things have changed a bit in the world of tech for a while.

Qualcomm seems to have decided to keep the users waiting for some more time. Meizu’s CMO Wan Zhigiang has officially confirmed that the slightly upgraded version of Snapdragon 865+ will not be released this year (2020). The comment was categorially posted on Weibo and information seems to be authentic.

Qualcomm has been dropping a slightly upgraded and worked-on version of the flagship Snapdragon chipset. Snapdragon 855, as mention above, came with quite a few upgrades like the refresh rate. If you recall, Snapdragon 820 received its re-worked successor- Snapdragon 821. Over 12 devices were launched last year that equipped Snapdragon 855+ chipset. Xiaomi making the most of it, we got to see ASUS, Nubia, LG, and even OnePlus quick enough to launch devices with the 855+ chipset.

Where it all began-

A Chinese blogger with the web name Digital Chat Station revealed that Snapdragon 865+ is under works. Also, users were informed that Snapdragon 865+ will be released in the third quarter of the year 2020. Most called the Q3 phase, the information was then passed on several websites with the screenshots. We also expected several devices lined-up to release by the end of 2020 to equip the upgraded version. 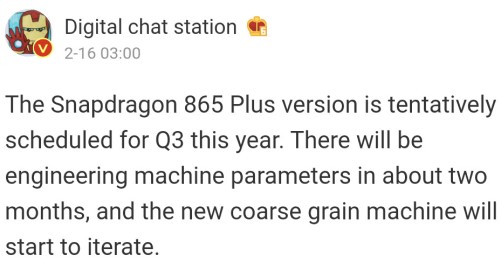 But Wan Zhigiang’s post is obviously more official and authentic. But looking back, Snapdragon 855+ was released within 6 months from the launch of its predecessor. The same applies to Snapdragon 821 too. The reason behind this delay is still questionable. We can assume it to be due to the pandemic or the postponing of device launches to the extent that the Snapdragon 865 is yet to properly utilized.

We are expecting this version of the chipset to come with an improved clock speed of the CPU and GPU. The 855+ was upgraded by 4% and 15% compared to its predecessor in the above-mentioned areas. We can expect a greater number this time. Also, we can look forward to OnePlus among the firsts to equip Snapdragon 865+ chipset. You will have a better outlook as the news about OnePlus 8T will come into the spotlight.

Rest assured, we will update the article when we receive further information about Snapdragon 865+ chipset, so stay tuned. Also, share this article with all those who were waiting for the processor.